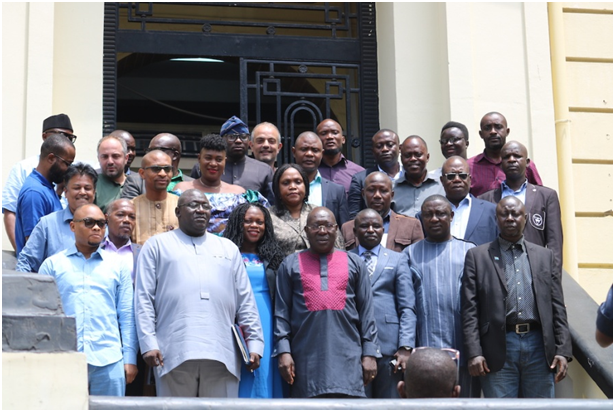 A team of stakeholders in Nigeria’s Biometric Identity Card Management on the 8th June, 2022 were very impressed with the progress made so far by Sierra Leone’s National Civil Registration Authority after a two-day visit.

“Today has been a very rich engagement. It’s been enlightening. We are here on a study to see the success story of Sierra Leone – what you’ve done so far; where you’ve come from. You came from where there were varying registrations; agencies responsible for different things; and today you are here under the umbrella of one agency”, Victoria Ojogboni  Esq –  Director of Planning, Research and Statistics from the Federal Ministry of Justice in Abuja, said at the end of the first day session held at the Finance Ministry’s Conference Hall on Tuesday.

Her comments conveyed her impression after NCRA’s Director General Mohamed Massaquoi gave a comprehensive report on the status quo of the National Civil Registration Authority. The Director gave a picture of what civil registration was like before NCRA was set up by the 2016 Act of Parliament – highlighting the state of confusion and uncoordinated efforts to register people for different purposes.

He later shared the processes, challenges, collaborations and partnerships that have helped build the single entity now empowered by Government as the sole Authority responsible for Civil Registration Vital Statistics, and Identity Management.

Asked what the team was taking home, IOM Consultant Dr Willie Eselebor said, “A lot of lessons from Sierra Leone – how you are able to manage this consolidated approach; harmonization of objectives; cooperation across the different agencies in trying to come up with a common identity card for Sierra Leoneans; so, it’s good”.

“The contract has been awarded and we are at the stage of production now,” he explained. Sierra Leone and Nigeria, he said are almost at the same level “but we’ve got lessons to learn from each other”, Eselebor said.

Ojogboni Esq was particularly impressed with the political will behind the success of the NCRA. She said gaining political will is the challenge some agencies face with implementation in some countries in Africa. “I discovered that you could only do that because, like you said, you had political will which you said was unqualified support of the President. For every country that must make change, there has to be that support. It’s very, very, very necessary. We cannot make any change if there is no support; if the political will is not there. You’ve just said to us now that when there’s a will there will always be a way”, she exclaimed.

Idara Osso, IOM Senior Programme Assistant said the visit “was insightful”. “We are happy to have learnt from Sierra Leone – beautiful things that I will go back home to share with my Senior Programme Manager”, he said. He was particularly impressed that Massaquoi sat through the whole day giving out helpful information. “It is very rare that you have the DG sit down throughout the whole day. He has taken out time to receive us; to educate us,” he said.

Ojogboni said that one of the things that `Sierra Leone has done with the unqualified support is to access donor support. “You also said to us that because of the two things you began the process of reform. That means you had to touch upon your laws. You had to bring in regulations”. She said the Nigeria case is an on-going study. “We have laws that have been lying down in our books that were even used in the process of executive orders to get people to do what they should do naturally which is already captured in the law. For Sierra Leone, one of the things we have learnt is that you have appealed, repealed and amended. And you have also created new laws to be able to effectively do what you are doing. No more silos! Now you have an umbrella body and it’s working”, she said.

The IOM team from Nigeria also learnt that there was ongoing consultation in respect of the data protection that is coming up. “That is another plus that we are taking away – that there’s need for consultation of all stake holders; everybody is important in the process. And then you also talked about stakeholder engagement – talking to the churches when it comes to what is obtaining in Christian marriages and traditional authorities,” Ojogboni remarked.

Ojogboni said that when all the pieces come together, implementation becomes feasible

“But what happens most of the times are the lofty ideas, lofty visions, lofty mandates, but nobody is actually doing the thing. But we’ve seen here today your immigration officer talking to us … we’ve seen implementation on the ground of these policies,” she said.

This was in response to James Cooper, Sierra Leone’s Head of Border Management at the Immigration department. Cooper was concerned that while Sierra Leone Immigration accepts emergency travel Certificates from ECOWAS member states including Nigeria, Nigeria on the contrary rejects Sierra Leonean citizens traveling on emergency certificates.

The team on Wednesday paid field visits to Sierra Leone’s land border crossings, the seaport and the Lungi International Airport to witness first-hand operations of border management and other immigration services.