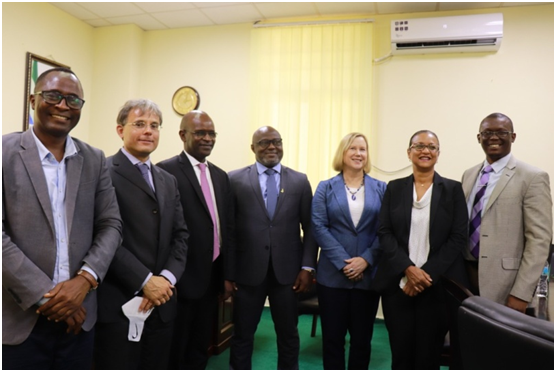 Susan Lund, Vice President of Economics and Private Sector Development of the International Finance Cooperation (IFC),    on Thursday 9th June 2021 paid a courtesy visit on the Deputy Minister of Finance II, Bockarie Kalokoh, who is representing the Minister of Finance , Denise Vandi, at his George Street office. The Vice President was on a three-day working visit to Sierra Leone.

The Deputy Minister of Finance II, Bockarie Kalokoh, heartily  welcomed the Vice President to the Ministry and the country further stating that Sierra Leone has over the years enjoyed a cordial relationship with the Cooperation adding how the visit by no less a person than the Vice President is a clear manifestation of that cordiality.

He went further to state that because of the confidence reposed on the leadership of the country development partners are still engaging the Bio led administration on projects even as national elections are not far away.

The Deputy Minister thanked the International Finance Cooperation for their interventions in the private sector over the years and requested that the Cooperation expands on its portfolio in Sierra Leone.

He highlighted that one big challenge the private sector is bedeviled with is access to long term sustainable financing. “Companies going into production most times raise their capital which at times is not sustainable,” he pointed out.

In the area of support to Small and Medium Enterprises (SMEs), Bockarie Kalokoh underscored that even though they face several challenges there are opportunities to support their development through providing finance and capacity building. He called for further technical discussions to look at the IFC’s portfolio, opportunities and possible interventions.

In her statement, the Vice President of Economics and Private Sector Development of the International Finance Cooperation (IFC), Susan Lund said the IFC is committed to expanding its operations in Sierra Leone, stating how currently they have several projects with the private sector in Sierra Leone like Kings Beverages including their agricultural supply chain and PEE CEE and Sons onions farm in Lungi.

Susan Lund continued that they are interested in energy, infrastructure and financial services, stating that they are here to engage both the Government and private sector to explore more opportunities.

Principal Deputy Finance Secretary, Mathew Dingie, in his statement stated that the Government has done a lot to support the private sector amidst varying challenges.

Susan Lund was accompanied by Aliou Maiga, the Regional Director of IFC and Freddy Roy, her Adviser.