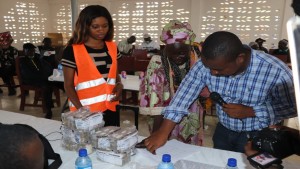 Seawright Mining Company has made the third set of payments of Le 170 million (one hundred and seventy million) Leones to land owners of Nimiyama and Gorama Mende Chiefdoms.

The presentation which took place at the company’s camp in Nimiyama Chiefdom, Kono District on Wednesday 14th August 2019 attracted stakeholders and other distinguished guests.

In his statement Seawright Mining Company, Chief Operating Officer (COO), Jabuline Mkoko said the gathering is for the company to fulfill its obligation to landowners and the chiefdoms.

He said it is the hope of the company that the payment will improve the livelihood of families and the communities.

Mr. Mkoko pointed out that as a company, they owe an obligation to impact the lives of the communities they are operating and the payments is one of the ways to fulfil and enhance such impact.

He disclosed that the company is constructing another cold room in Gorama Mende Chiefdom which will also impact the life of that community and hoped that it will improve the protein of its people as fish is one good source.

He reminded the people that the company is still in an exploration stage and called on them to bear with them for not giving out as more as they are expected.

“We are at a stage where we are not generating revenue but rather spending and spending. We are still busy to search in other to get result, let our expectation not be too high,” he stressed.

Nimiyama Chiefdom Chief, PC George Bockarie Torto thanked the company for a number of reasons such as the payment to land owners and the state-of-the-art cold room among others which he said the company has done beyond the chiefdom imagination in what they are doing for them.

He spoke about the problem the chiefdom had over the years and educated his audience that the payment was not surface rent but a compensation to land owners (land owners family).

“The land tenure system in Kono is different from others. I am receiving the money on behalf of my people as a trustee and distribute it to them.”

Surface rent, he went on is a determination of a land being used for mining not for exploration.

“We hope that the company will soon get their mining license where they will take a portion of land and begin to pay surface rents.

“They are doing well considering the circumstance. A company like this should be embraced. I don’t know the condition of EPA but the company has satisfied us and they can’t do more than they are doing now.”

Chiefdom Speaker of Gorama Mende Chiefdom, Chief Songu Koroma thanked the company for the good work in their community.

He spoke about the hard times they and the company went through and how they are united to support the company.

He commended them for the ongoing construction of roads and cold room in that community.

Before disbursement of payments to land owners, the Company Financial Manager, Mohamed Tunkara reiterated that the Company was not paying surface rent but payment to land owners because they were still on exploration stage.

He explained that they presented bulk payment in the sum of Le 70 Million to PC George Bockarie Torto of Nimiyama Chiefdom as the custodian of the land whiles Gorama Mende received Le100 Million and divided by Family head totalling Le 170 million (one hundred and seventy million Leones).

He went on to say the payments to land owning families have started from 2016.

He said an MOU was signed between land owners and the company asking for them to compensate them for the use of their land among other things.

Mr. Tunkara thanked the government and its partners such as NMA, EPA and NRA for their collaboration and supports to the company.

The chairman ceremony Seawright Mining Company Community Affairs Manager, Tamba Jabba, said it’s a promised the company made and they don’t want to bridge anything they have agreed upon.

“This is one of the signs of our respect; though we are not getting anything yet from the search we are doing.”

Beneficiaries expressed their profound appreciation to the company for their support to them and their families.