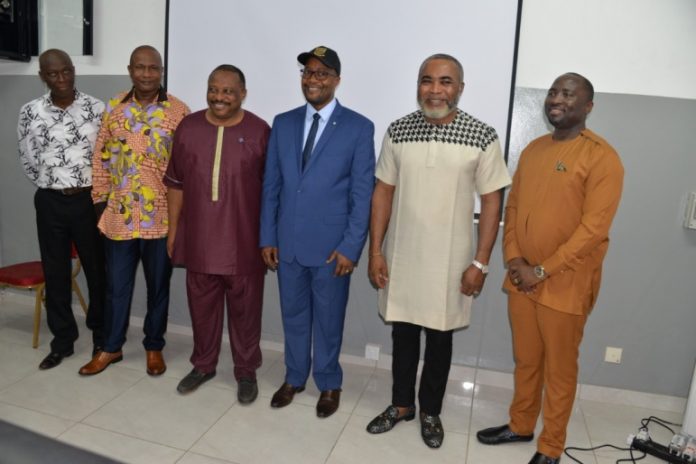 A veteran Nollywood actor and former Chairman of the Actors Guild of Nigeria (AGN), Mr. Zack Orji and Emma Oyilogu paid a courtesy call on the Minister of Information and Communications, Mohamed Rahman Swarray at his Youyi Building office in Freetown.
The purpose of the visit according to the Director of Next Movie Star, Sierra Leone Limited (NMS) Mr. Mohamed James Kamara is to enhance the campaign and awareness raising effort of government through movie on the eradication of rape and sexual violence against girls and women in the country.
Welcoming the film stars on behalf of Government and the people of Sierra Leone the Minister of Information and Communications, Mohamed Rahman Swarray underscored the long-standing bilateral relations between Sierra Leone and the Federal Republic of Nigeria paying tribute for the numerous assistances rendered by Nigeria in the good and bad times of the country’s history including the civil war, Ebola and Mud-slide among other issues. The support to Sierra Leone by the veteran Nollywood Film Stars will serve as a platform for mentoring and coaching of the numerous Sierra Leonean talents in the film industry. This will create an enabling environment for them to realize their full potentials, he added.
The Minister assured the veteran Nollywood film stars of his Ministry’s fullest support to their shooting venture in Sierra Leone.
According to Mr. Zack Orji, they are in Sierra Leone to work with the Next Movie Star, Sierra Leone Limited (NMS) to produce a 52 Episodic Movie – ‘Who You Are’ a serial movie to enhance the campaign against poetic justice, sexual assault and to protect women and girls from being raped.
Present were the Deputy Minister of Information and Communication, Solomon Jamiru Esq; the Permanent Secretary of the Ministry, Augustine S. Sheku and other officers from the Ministry.