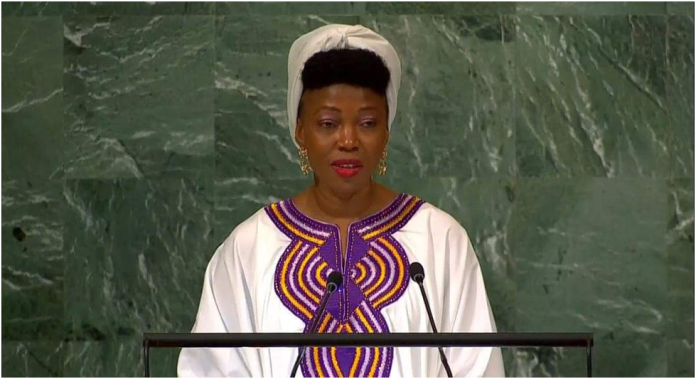 Her Excellency, Madam Fatima Maada Bio, the First Lady of the Republic of Sierra Leone has on Monday 7 November 2022 introduced a Draft Resolution to Declare November 18 the “World Day for the Prevention of, and Healing from Child Sexual Exploitation, Abuse and Violence” at the UN General Assembly

The said Resolution was unanimously adopted by the United Nations General Assembly on the 7th November 2022.

The groundbreaking resolution was initiated by Sierra Leone in collaboration with Nigeria to declare November 18 the “World Day for the Prevention of, and Healing from Child Sexual Exploitation, Abuse and Violence”.

At the heart of the resolution is the need, among other things, to establish and implement an annual universal mechanism to promote and reinforce greater awareness, commitment and responsibility of the world body, Governments, international organizations, and civil society toward safeguarding the dignity of children as well as ensuring their right to live free from violence and to end exploitation, abuse, trafficking, torture and all forms of violence and harmful practices against children.

While introducing the draft resolution at the UN General Assembly under agenda item 131 – “Sexual Exploitation and Abuse: Implementing a Zero-Tolerance Policy”, Her Excellency Dr. Fatima Maada Bio conveyed a message of best wishes from His Excellency Brigadier (Rtd) Julius Maada Bio, President of the Republic of Sierra Leone adding that her participation in the plenary meeting was a testament to the importance His Excellency President Maada Bio and his and Government attach to the concerns of women, children and the marginalized.

First Lady Dr. Fatima Maada Bio who, since the assumption of office of President Bio, embarked upon the cause of protecting girls and vulnerable adolescents through her ‘Hands off our Girls’ flagship campaign, reminded the General Assembly that children, especially girls have continued to endure greater risk of the scourge of forced sex and sexual exploitation with all the related crimes ranging from abuse, violence to chronic and life-threatening diseases.

In thanking all the delegations that joined in the co-sponsorship of the draft resolution, and the entire General Assembly for the resounding adoption of the resolution, First Lady Dr. Fatima Maada Bio called on the world body to mobilize the necessary political will and the provision of much-needed resources to address the menace and protect women and girls and other vulnerable sectors of society. She particularly also called for the enhancement of laws that protect children in their homes, online, and in their communities and to bring perpetrators of these heinous crimes to justice.

As an ardent advocate and hands-on champion of social justice, she reminded the august Assembly that preventing child sexual abuse is an emergency which is do-able and requires a multisectoral approach. Thus, she appealed to Governments, international organizations, and civil society to support parents; help teach positive parenting skills and increase the awareness among every stakeholder to build a strong coalition to combat child sexual exploitation, abuse, and violence.

In concluding, Her Excellency, First Lady Fatima Bio commended the General Assembly for declaring the 18th November as World Day for the Prevention of, and Healing from Child Sexual Exploitation, Abuse and Violence, adding that it was a bold step toward the raising of increasing awareness of Child Sexual Abuse with regularity and on a global scale.

First Lady Dr. Fatima Maada Bio also seized the opportunity to remind the Member States of the UN of Sierra Leone‘s bid for membership of the UN Security Council in the non-Permanent category for the 2024-25 term, highlighting the commitment to pursue similar objectives and priorities.

The moment when the President of the United Nations General Assembly used his Gavel to announce that the Resolution presented by Her Excellency the First Lady of Sierra Leone Dr. Fatima Maada Bio, had unanimously been adopted by the global community of the United Nations from across the World was shortly after the representative of The Holy See on behalf of the Catholic Pope, gave the closing remarks to passionately thank the Republic of Sierra Leone.

H.E. Ambassador Fanday Turay addressed a Press Conference at the United Nations after Her Excellency Dr. Fatima Maada Bio, First Lady of the Republic of Sierra Leone, addressed the UN General Assembly on the need for November 18th every year to be commemorated as “World Day for the Prevention of, and Healing from Child Sexual Exploitation, Abuse and Violence”. The outcome was a resounding support for the Call by the First Lady by well over 100 countries – and eventually it was adopted unanimously.