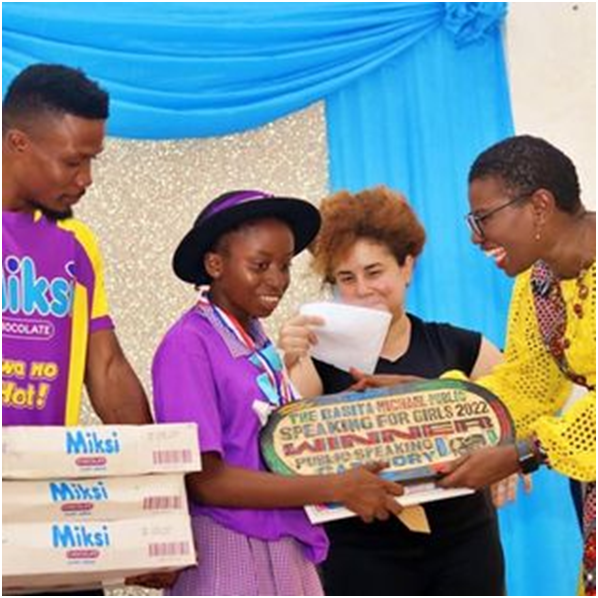 Miksi Chocolate, one of the brands marketed by Premium Divine Trading Company Limited, a food distribution company that operates as an agent for Promasidor Holdings, a leading distributor of quality food products in Sierra Leone, has supported The Basita Michael Public Speaking for Girls on the theme: “Digital Generation, Our Generation,” organized by the Patriotic Advocacy Network Sierra Leone (PAN-SL), at the Hill Valley Academy Multipurpose Hall, on Mambo, West End of Freetown.

The grand finale of the competition featured the participation of twenty girls who participated in the Public Speaking, Spoken Words, and Music Categories.

Miksi Chocolate has been commended as one of the best healthy beverages that give nourishment by many young people who joined The Basita Michael Public Speaking for Girls grand finale competition.

Premium Divine Trading Company Limited’s support to Patriotic Advocacy Network Sierra Leone (PAN-SL), in their The Basita Michael Public Speaking for Girls grand finale competition, was done within the context of the company’s massive education on healthy eating habits by availing their products to actual and potential consumers of chocolate, the Miksi nutritious package, to enable them and their families enjoy good nutrition through the consumption of  Miksi chocolate drink that were sampled during the competition.

Speaking on behalf of the company, the Marketing Manager of Premium Divine Trading Ltd, Kwaku Ampadu Afoani spoke on the importance of Public Speaking for Girls of which he pointed out that the event will empower young girls with the necessary skills needed towards their development.

He encouraged the participants in the Hall to believe in themselves and also make good use of the opportunity given to them, adding that Public Speaking is very important as it enables them to be outspoken.

He said that as part of their corporate social responsibility as a company the company is pleased to donate 80 cartoons of Miksi Chocolate to the Patriotic Advocacy Network which will use used as part of the prizes to be given to the participants of the competition.

The Marketing Manager further revealed that the Miksi brand consists of Miksi powdered milk, Miksi Chocolate and Miksi Coffee of which he encouraged participants to add Miksi as part of their daily food intake adding that Miksi offers a healthy beverage or snack anyway, anytime.

He maintained that Premium Divine Trading Company Ltd also distributes and markets, Onga, Xploza, Kremela and Yumvita , the latter being an infant cereal with milk also consisting of wheat, rice and maize and wheat variants.

He concluded by appealing to all young people present to always buy the quality food products of Premium Divine Trading Company Ltd especially Miksi chocolate and Miksi Coffee because they are enriched with all the necessary nutrients needed by the body.

In her opening statement, the Chairperson of the Board of Directors of PAN-SL ,who also doubles as the Lead Project for The Public Speaking for Girls, Patriot Janet S. Kallon said that in celebrating this year’s International Day of the Girl Child, PAN-SL and partners recognized it with the 2nd Edition of Public Speaking Training, Career Building and Competition for Girls who are attending various secondary schools in the Western Area Urban and Rural.

She said that PAN is a nonprofit making organization that is operating across Sierra Leone with a large membership of over 1,500 and has chapters in all major schools in the country.

In her statement, the Principal of the Hill Valley Academy, Madam Zainab Kamara threw light on the background of her school which was established in 2018 with the Motto: “Together We Can Achieve The Extraordinary”

She welcomed all and sundry to the prestigious school; Hill Valley Academy and said that they encourage a sense of responsibility and they will continue to support initiatives that aim at building a better Sierra Leone.
In her keynote Address, one of Sierra  Leone’s brilliant Lawyers and vociferous rights activist,  Basita Michael stated :“I was so humbled to be given the opportunity by the Patriotic Advocacy Network to serve as the keynote speaker. The first thing I did was to look at the theme: “Digital Generation, Our Generation”.

“I have observed in many campaigns, they are just emphasizing on education, it’s time we focus on the access to technology,” she stated.

Closing the programme was a certification and awarding ceremony of participants, of which certificates were given to the twenty schools that participated in the entire competition, all the sixty (60) girls who competed were awarded and medals and cash prizes were given to the best three from each category including cartoons of Miksi Chocolate.