One of Sierra Leone’s typical indigenous Companies, the National Petroleum Sierra Leone Limited (NP-SL Ltd.), on Saturday 16th March 2019, officially opened its latest fuel station at Wara Wara- Yagala Chiefdom within the heart of Koinadugu district.
Present at the ceremony were Paramount Chief Gbawuru Mansaray III of the chiefdom, Paramount Chief Marah, Chairman of the Board of Directors of NP-SL Ltd, Michael Carrol, General Manager of NP, Kobi Walker, Bernard Sisay, Marketing Manager of NP, Head of the military in the district, Major Williams, Dr. Sheku Sesay, Director Alhaji Rahman (Board Member), LUC of Kabala Police Division Lansana Koroma, the Petroleum Agency Director, Mr. Victor Sawyer, the Kabala NP Dealer, Wurie Bah, Management and staff of NP including Mr. Aboko-Cole the officer who is heading the lubricant department of NP, Mr. Gaima, the officer responsible for NP Gas, the press and residents of Kabala.
In his welcome address, PC Gbawuru Mansaray the III expressed his sincere gratitude to the company for making establishing the new NP station in that part of the country noting that the company will help to alleviate the problem of NGOs, MDAs and ordinary people accessing fuel.
He praised the Management of the company for raising the bar high in the industry further expressing hope that more stations will opened in the district.
The Paramount Chief cautioned residents that they must be mindful of the fact that the fuel which will be sold in the district is for Kabala and should not be taken outside for sale saying that residents must take ownership of the facility.
Delivering a statement on behalf of the Management and staff of NP-SL Ltd, the General Manager, Kobi Walker stressed that NP-SL is 100% owned by Sierra Leoneans.
“Not a single share of the company is owned by any politician,” he further disclosed adding that 35 Sierra Leonean workers sacrificed their severance packages and benefits and used such to establish the company.
“What is being done in Koinadugu is as a result of the sacrifice which those 35 Sierra Leoneans made in 1996,” he stated going further to reveal that today NP is in the Republic of Guinea, Ivory Coast, Gambia and Liberia.
“These materialized because of the sacrifice, vision and passion of those Sierra Leoneans,” he underscored with pride. He admonished residents in the district to own the company as it is an indigenous one.
Kobi Walker pointed that every single litre of fuel residents will purchase from NP-SL they must realize that the money will stay in the country and used to undertake other development projects stating that on the other hand, foreign companies take the bulk of the money from their sales out of the country to build their own countries.
He noted that the sacrifices of those 35 Sierra Leoneans paved the way for them to have jobs and admonished Sierra Leoneans to support the company to reach higher heights and provide the opportunity for generations yet unborn to benefit.
Chairman of the Board of Directors of NP-SL, Michael Carrol, said the reason for choosing Koinadugu is because of good security and the culture of the people. “The company is encouraged by the security of the district and we are looking forward for greater things to unfold,” he expressed optimism.
He further buttressed the point of the General Manager that NP-SL is purely owned by Sierra Leoneans and no politician has a stake in the company.
“This new station marks the 38th fuel station opened by the company within the country,” he revealed.
Further buttressing the statements of his bosses, the Marketing Manager of NP-SL, Bernard Sisay maintained that the latest investment is a demonstration of the company’s commitment and passion to serve the whole country. He thanked the Paramount Chief and the people of Koinadugu district for the warm welcome they received. “This latest station is NP’s new baby,” he euphemistically stated assuring the audience that NP will do all in its power to ensure that there is no shortage of fuel in the district emphasizing that they will not let the people down.
In his brief statement, the Local Unit Commander of the Kabala Police Division, Lansana Koroma, assured residents and the company that as far as security is concern they are on top of things.
He expressed appreciation to residents in the chiefdom for their intermittent assistances to the Police which have made it possible for that part of the country to be safe. He warned dealers and others to keep within the dictates of the law and avoid smuggling fuel to neighboring countries.
Other speakers praised NP for their intervention in that part of the country for its investment.
The vote of thanks was given by the dealer of the new NP station, Mr. Wurie Bah. The ceremony was climaxed by cultural display and social interactions. 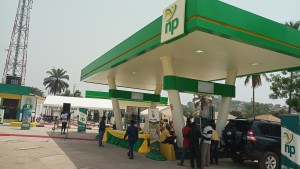 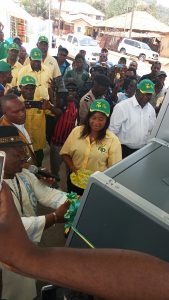 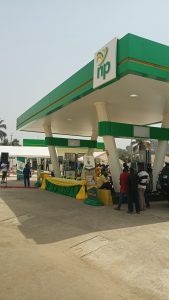 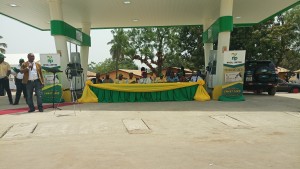 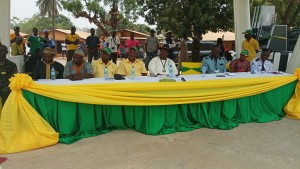 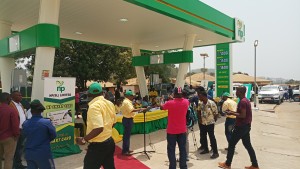