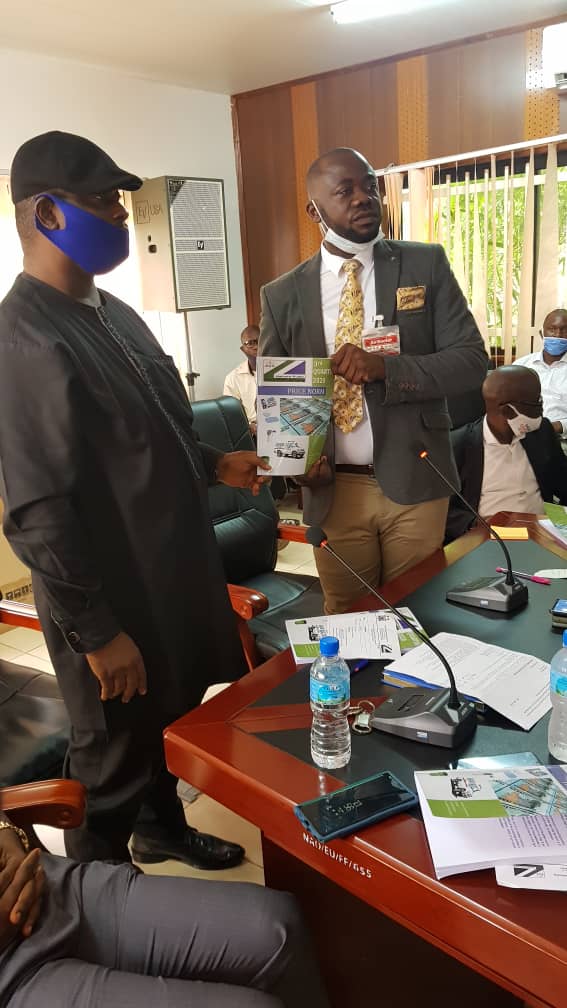 On Thursday 2nd July, 2020, the National Public Procurement Authority (NPPA) unveiled its 3rd Quarter Price Norm at the Ministry of Planning and Economic Development on Tower Hill in Freetown. The Price Norm is intended to serve as a guide for Ministries, Departments and Agencies to undertake accurate and acceptable public procurement of goods, services and works.

Speaking during the launch, Chief Executive Officer of the National Public Procurement Authority (NPPA), Ibrahim Brima Swarray, disclosed that there is no way a nation can develop and enjoy good governance if its resources are not utilized judiciously.

The Chief Executive Officer of the National Public Procurement Authority, Ibrahim Brima Swarray, added that when he was appointed as Head of that institution he noticed that the state of national procurement was in a total mess. “The status quo was rotten to the core,” he bemoaned adding how the country has highly qualified procurement practitioners but such was not reflective in the way and manner procurement procedures were done.

He highlighted that under his jurisdiction he will ensure that the era of corrupt procurement practices, as contained in various past audit reports, will become a thing of the past.

He noted that procurement consumes a large chunk of State resources maintaining that if there are no controls, discipline and management in the way and manner Government funds are spent, then there is the tendency for corruption, backwardness to take place, with the possibility of the eruption of war, because people will fight for themselves.

The NPPA Boss stated that under his jurisdiction he will ensure that the era of corrupt procurement practices, is aborted, adding that when a country has decent and proper guidelines on the way citizens’ monies are spent, then the rule of law will hold.

He stressed that the New Direction Government, under the leadership of President Bio is doing the right thing in a different and well organized manner.

The NPPA CEO further informed newsmen that the Price Norm encompasses prices of various goods or commodities, services used in the country and should serve as a reference whenever procurement is to be made by Ministries, Departments and Agencies.

He appealed to procurement officers in MDAs to always comport themselves professionally in order for transparency to be seen at play.

Swarray disclosed that he still maintained an earlier commitment  that e-procurement will come into full force promising that before he leaves that institution such will be achieved.

Swarray disclosed that the price norm is now part of the country’s laws saying gone are those days when MDAs place different prices for the same commodity they purchase.

He stated that the country’s international partners are very much focused and are concerned with how the Government is utilizing the country’s resources.

The CEO praised the leadership style of President Bio saying such has enabled the Government to gain more donor confidence, further disclosing how the Government is committed to follow the price norm and procurement processes.

Swarray stated that there are challenges, but as an institution they are poised to overcome them because the NPPA has the political support to execute its responsibilities. He encouraged Procurement Officers to always follow the due process and stop delay, because no matter what, NPPA will do due diligence.

Speaking during the program the Chairman of the occasion thanked the leadership of the NPPA for such a marvelous job. He stated that the price norm will help procurement officers to understand the market forces relating to demand and supply,

He profusely commended the NPPA team, stating that the price norm is not a price tag, but the fundamental objective is to make sure that there is fair knowledge on prices in the market. He also stated that the price norm is a tool against corruption and encouraged the NPPA to always engage procurement officers, noting that they too face huge challenges.