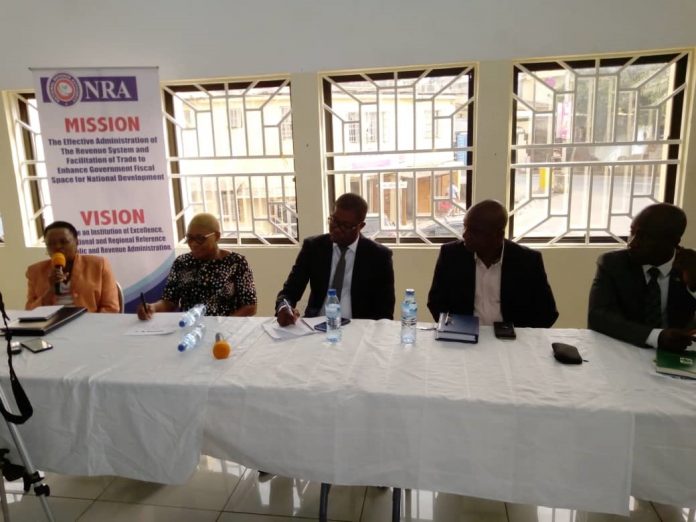 In the quest to beef up an effective administration of the revenue system and facilitation of trade to enhance Government Fiscal space for national development, the National Revenue Authority (NRA) with support from the African Development Bank (ADB) has on Thursday 13th February 2020 launched the “Enhancing Tax Compliance Project” at King Palace Hall on Wellington Street in Freetown.

In his address, Commissioner General of the National Revenue Authority, Dr. Samuel S. Jibao, said that any strong and decisive Government is one that envisions financing its public expenditure primarily from domestic revenue rather than depending on the unpredictable and conditional donor funding. He noted that whilst donor budget support still has a strong presence in the Sierra Leone Government Budget they, however, want to make domestic revenue contribution a panacea to the development of Sierra Leone.

He said their commitment in financing the public budget has its consequential impact in promoting long term economic growth and reducing poverty through increased Government spending in public infrastructure and human capital.

The Commissioner General noted that the launch of the “Enhancing Tax Compliance Project in Sierra Leone” reaffirmed their commitment to achieve their mandate as an institution, adding that they are excited to rolling out the project for many reasons in order to meet all their targets, but said they still have to expand their tax base and the low level of compliance in certain sectors in the tax system in Sierra Leone.

Underscoring the aims of the project, he said, it will increase  compliance of GST with the introduction of Electronic Cash Registers (ECRs) saying they have analyzed the potential of ECRs in closing the tax gap with regards domestic GST through the assessment of the change in liabilities of the taxpayers participating in the pilot

He added that it will also increase SMEs’ compliance with their tax obligations with the rolling out of the Domestic Tax Preparers’ Scheme underscoring how the NRA will identify and train up to 60 Tax Advisers (in conjunction with the Institute of Chartered and Certified Accountants of Sierra Leone), as well as provide them with office spaces in Freetown and in all the district towns.

He assured the Africa Development Bank that the NRA will do its best to deliver the objectives of the project in the time allotted to it as they already have a modernization department which will exclusively provide oversight for projects of this nature just to keep in tune with the demands of donor money.

Country Manager, Africa Development Bank, Ms. Peninah Kariuki expressed appreciation to National Revenue Authority and the Ministry of Finance for the launch of the project, adding that the Enhancing Tax Compliance Project was approved in June 2019 worth 1.4 million dollars which was a grant to Sierra Leone and the project speak to the need to raise internal resources.

She also reiterated the objective of the project which she said  will increase compliance of GST with the introduction of Electronic Cash Registers (ECRs) which she reiterated what Commissioner General said that they have analyzed the potential of ECRs in closing the tax gap with regards domestic GST through the assessment of the change in liabilities of the taxpayers participating in the pilot and also increase SMEs’ compliance with their tax obligations with the rolling out of the Domestic Tax Preparers’ Scheme.