The items consisting of 30 bags of rice, bags of Onion, salt, cooking oil, together with Veronica Buckets and additional sanitation products were presented to the Chiefdom by a representative of the Ambassador, Mr Abdul Karim Turay, to Paramount Chief Madam Matilda Yayo Lansana Minah V who is also the sitting Paramount Chief Member of Parliament (PCMP) representing Pujehun District .

Making the presentation, in a short ceremony, in Karlu Town, Mr Turay indicated that Ambassador Golley was very keen for the items to be delivered to support the people of his Chiefdom on the fight against the deadly virus during the Muslim Holy Month of Ramadan, and also assist in his own small way with shielding the people from the corona pandemic which had now affected almost every part of the world.

Paramount Chief Madam Lansana Minah V accepting the items extended her profound gratitude to Ambassador Golley who she termed “a great humanitarian”, who despite being in lockdown in the United Kingdom due to restrictions caused there by the Coronavirus, had nevertheless manifested love for his people by arranging for the items delivered to be presented at the earliest opportunity to the Chiefdom.

The Paramount Chief also admonished other family members from the chiefdom who were in a position to assist, to follow the footsteps of the Ambassador. 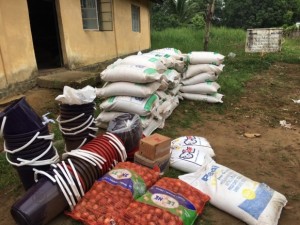 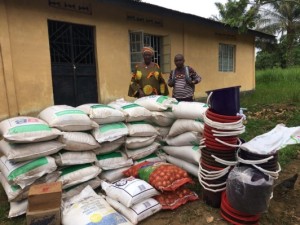