Residents of Pujehun District joyfully welcomed Sierra Leone’s former Ambassador to South Korea, Omrie Michael Golley, over the weekend as he was visiting the district to introduce his agricultural development program as well as consult on his political future.

Golley, who has maternal origins from Pujehun and  paternal lineage from the Western Area has been touring various parts of the country to establish agricultural training centers as part of his efforts to promote drip irrigation and food self sufficiency in Sierra Leone.

This medium was intimated that the British trained lawyer is set to introduce drip irrigation – a cost effective and environmentally friendly agricultural technology perfected in Israel to ensure crops are produced throughout the year. So far, over four agricultural training centers have been established in Bumbuna, Port Loko, Bo and Kenema Districts. He has recently funded and inaugurated the first students’ farm for the University of Makeni.

At a jam packed meeting in  Pujehun past Saturday, Ambassador Omrie Golley explained his vision for a food self sufficient Sierra Leone adding; “I believe this country deserves to move forward  and we  must all unite and work together regardless of our political ideology, region or tribe…” he said. 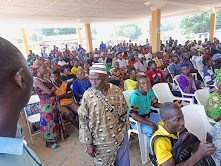