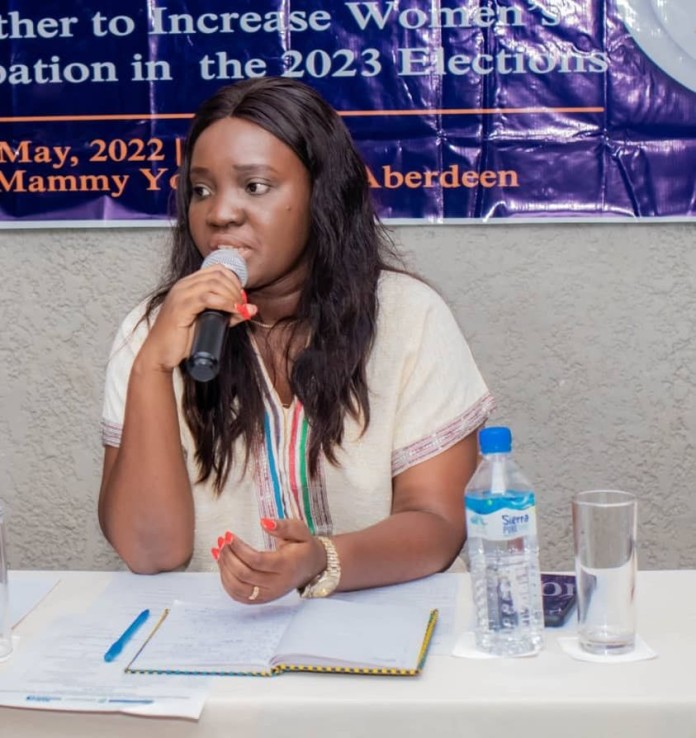 By: Millicent Kargbo, Executive President of the Sierra Leone Association of Women in Journalism (SLAWIJ)

The advancement of digital technology has enabled people to easily communicate, raise awareness, share important information, connect with family members, socialize, and work together. However, as access to the internet continues to expand around the world, the Sexual and Gender-Based Violence (SGBV) that women and girls face offline is now replicated online. When women and girls enter online platforms– ranging from messaging apps like Facebook and WhatsApp, to Twitter, TikTok, and gaming apps– they are frequently faced with digital threats.

The digital threats faced by women online include, among others: harassment (which can include name-calling, as well as repeated negative or threatening comments made to or about a person), cyberbullying, stalking, doxing (which is the act of sharing private information about a person or organization publicly, which could put them at risk), and the non-consensual distribution of images of a person. Besides having the potential for causing serious emotional harm and distress to those affected, such actions can also act to shame women, and silence or discourage them from using online platforms and/or engaging in public discussions – which they have every right to do. While men can face similar types of online violence, women and girls are often the most affected – particularly in Sierra Leone.

A report launched by the Sierra Leone Association of Women in Journalism (SLAWIJ) in July 2022on “Threats Against Public-Facing Women in Sierra Leone” focused on highlighting the experiences of women human rights defenders and female journalists in the country. Of the women journalists and activists consulted by SLAWIJ as part of the research project, 64% said that they have personally experienced at least one form of threat, harassment, and/or violence against them, either as a result of their role or during the course of their working life. According to those consulted, the three most common threats that are experienced by Public-Facing Women in Sierra Leone include harassment, verbal insults, and verbal threats.

While bullying and harassment remain an age-long challenge for women, SLAWIJ has found that online harassment has taken it to a new level – one where women often feel particularly vulnerable against perpetrators (which can include men as well as other women), and many of those affected are unsure of how or where to seek assistance.

Sierra Leone recently enacted the Cyber Security and Crime Act, 2021, which criminalizes cyberbullying – meaning that, in theory, it should now be much easier to report such cases of online harassment to the police. However, SLAWIJ’s report highlighted a number of challenges for women who may wish to pursue a case of cyberbullying and/or online violence in Sierra Leone – including a widespread hesitancy to report cases of violence (due to fear of stigmatization and/or retaliation by perpetrators), as well as a lack of understanding and technical skills necessary to document such incidents. This last challenge is particularly important to note, since according to SLAWIJ’s research, despite the law now being in place, the burden of proof still rests largely on the individuals experiencing the online abuse. For the most part, the state has still not provided law enforcement agencies and personnel with the training and support necessary for them to fully investigate (let alone track or identify) such incidents – meaning that it is up to those affected to personally take responsibility for collecting evidence of the harassment they face. This can be done, for example, by downloading images or taking screenshots that document threatening messages posted online, and saving the contact information of those involved.

Meanwhile, for SLAWIJ’s part, since the publication of its report in July, the organisation has been following the social media pages of various public-facing women in Sierra Leone – women who are in leadership roles or other public-facing professions (such as journalism, politics, law, medicine, etc.) – to identify and document cases of online bullying or harassment perpetrated against them. Through this process, it has been observed that there seems to be an increase in online bullying, not only from men but also from other women. As such, SLAWIJ believes that there is a growing need for the public to be better informed about what constitutes online bullying, what are some of the effects on women and their families, and what types of statements qualify as “bully statements”. There is also an opportunity for citizens to learn from strong public-facing women about how they manage online bullying, and continue with their work in the face of such challenges.

If online violence and cyberbullying continue to grow, it is conceivable that more women might disappear from public scenes. This will limit women’s participation in public life with serious consequences on women’s empowerment. Already, some women have restricted their platforms for fear of negative comments or attacks from the public. Women need a safe space online to thrive and share their work.