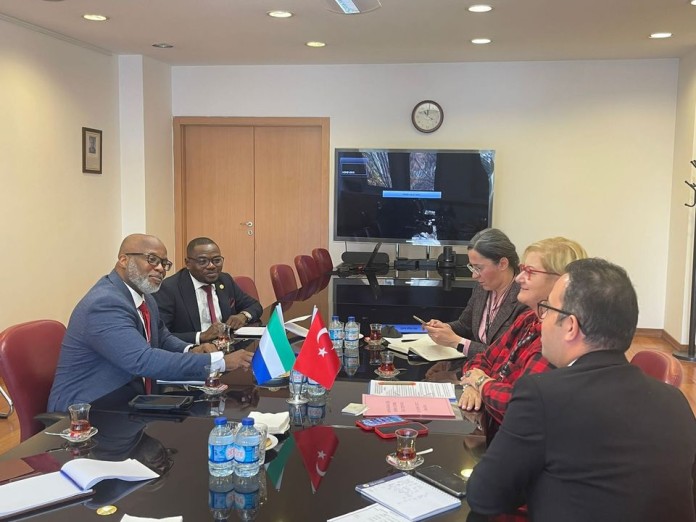 Sierra Leone’s Ambassador to Türkiye, Mohamed Hassan Kai-Samba has on the 28th November,2022 engaged the Turkish Director-General for Africa, Ambassador Nur Sağman, and has expressed serious concerns over the well-being of Sierra Leoneans living in Türkiye, particularly their frequent and massive deportation.

Ambassador Kai-Samba thanked the Turkish Director for Africa for her tireless endeavors in deepening the bilateral relationships between Sierra Leone and other Africa nations, saying that he particularly visited for growing concerns at the rate at which his citizens were arrested, detained and deported; adding that even those with valid resident permits and with no criminal records were been victims of arrests and deportations.

“My team and I are here this mornings to know and chat the way forward for the massive deportation of my citizens. As ambassador, I need to know their crimes, and if possible have audience with them while they are been held in the various prisons”, Ambassador Kai-Samba noted.

Ambassador Kai-Samba further informed that the Sierra Leone Embassy has on several occasion written note verbal to the Turkish Ministry of Interior so as to look for possible ways for both sides to engage on the matters of arrest and deportation.

“I am also reliably informed that some of my citizens who are on studies in Türkiye are also being arrested and deported. I need to have a clear understanding on what is going on. I am aware that diplomatically I am not supposed to interfere with the laws of the host country, but it is also my responsibility to ensure my citizens are safe and protected in Türkiye”, he maintained.

On her path, the Turkish Director-General for Africa, Ambassador Nur Sağman thanked Ambassador Kai-Samba and team for their visit, and for his bold and frank concerns over the well-being of his people; saying that Sierra Leone was one of the few embassies in Türkiye who has engaged the Turkish authorities on many occasions on matters regarding arrests and deportations of their citizens.

Ambassador Nur Sağman further noted that she would inform the Turkish Ministry of Interior and organize a meeting for both sides to look into those alleged issues. She also explained that she was aware of many Africans and other nationals in Türkiye who were being deported because they entered the country with tourist visas but have over stayed their visit in the country.

She also thanked Ambassador Kai-Samba and the Government of Sierra Leone for signing many bilateral agreements with Türkiye, saying that she was optimistic that the two countries would continue to work together for mutual benefits.