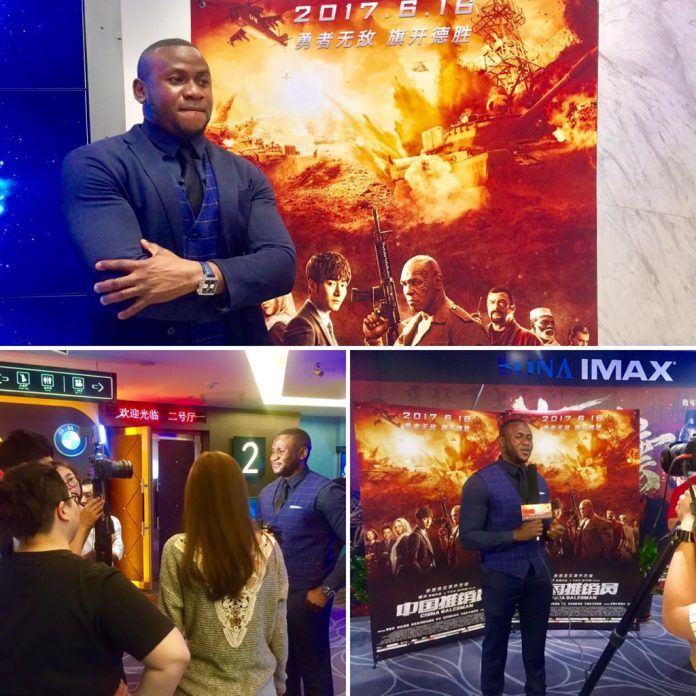 In the summer of 2015, my life seemed to be on an upward trajectory. I had just completed a TV series called ‘Song Yao Ru’ which was based on the real-life story of a Chinese revolutionary who had departed the US and embarked on a mission to effect cultural and social changes in China. I had also shot a few TV advertisements (including one for Lenovo), and for the first time in a long time, my dating life had a semblance of normalcy and stability. My previous relationship was topsy-turvy – although I took lessons from it like I do in all my relationships.

The ‘Song Yao Ru’ TV series was vital to that phase of my life because it was during shooting that I met a British actor, who I fondly dubbed ‘Big Kev’ aka ‘Da Unit’. He is a massive fellow. We struck up a rapport and became friends. One day I got a call from big Kev. He told me about a China Film production featuring some Hollywood big hitters and asked if I was interested. In my mind I was like “Are you kidding me? Hell Yeah”. But I played it cool on the phone.

I was buzzing when I got off the phone and couldn’t contain my unbridled joy. A few days later, Big Kev sent me a message with directions to the casting call. I barely slept a wink the night before. I went through a gamut of thoughts and emotions. In my mind, I was thinking “This might be big, don’t screw up, be like Eminem when he said opportunity comes once in a lifetime.” I was stoked but also a nervous wreck.

To say I was punctual on casting day would be an understatement. I arrived early and met the casting director. We spoke briefly, and with a twinkle of excitement in his eyes, he laid out his vision for the movie and mentioned he had worked with Jackie Chan. He said Jackie’s stunt team would be in charge of fight scene choreography, I was like “Holy smokes, this is real”. Internally of course, I am usually as cool as a cucumber on the outside.

I was already sold on the idea when he mentioned Jackie Chan, but his next utterance drove my emotions off the cliff. Remember when I said I am usually ‘Mr Cool’? Well, scratch that. In a very casual but deliberate tone, he said, “We are going to have Mike Tyson and Steven Seagal as actors on this flick” then paused briefly to gauge my reaction. I had grown up watching Iron Mike destroy people in the ring and any action movie buff knows ‘Mr. Aikido, break your arms’ Seagal. It was surreal.

At that point, I wasn’t even listening to Mr. Director. I was already in a different stratosphere; I was revved up and ready to go. I was thinking, “When are we getting this show started?” Mind you, I hadn’t even been officially casted yet, no roles guaranteed.

I snapped out of my temporary hallucination when he asked if I was ready to audition. In China, auditions are pretty routine. You show up with your CV in a PowerPoint presentation, a showreel on a USB, you do an introductory video, list your name, age, height, weight, nationality, previous projects, etc., read a couple of lines, take some pictures and you are good to go.

The director asked if I would be interested in playing a military commander, and I obliged. Frankly, I would have taken any role at that point. I was euphoric and on cloud nine when I left the audition. One step closer, I thought.

A TWIST OF FATE

I was working out, discuss the terms of contract with my agent and preparing for my role when the unthinkable happened. I got a message from the casting director asking me to head back to the casting studio. My first thought was, “Oh man! What now? Did they find a more suitable actor? Is my agent asking for too much? “. I didn’t know what to expect.

When I arrived, the first question he posed to me was “How is your boxing?” At that point I was definitely not a boxing savant, but I wasn’t gonna tell him my boxing was mediocre! I said “pretty good” with as much confidence as I could muster. Next he goes, “Lemme see what you can do, shadow box a bit”. I am thinking, “Does this guy know I am from Freetown, where people can do anything for survival?” I had seen enough boxing fights to have the basics, and I did the best I could. It appeared that was good enough because the next sentence got my adrenaline pumping profusely.

“Look, we were trying to get Mike Tyson’s stunt double from ‘IP MAN 3’ to join this project, but he can’t make it. We have gone through all the actors who have joined this audition and others based abroad, but we feel in terms of physique, you are the most suitable to take on this role”. It felt like I was in a trance, and he was speaking in slow motion.

In a funny twist of fate, I had received the Mike Tyson’s autobiography ‘Undisputed Truth’ as a birthday gift a few months before. Was that an omen or a sign that this was meant to happen? Was the individual who gave me that gift a clairvoyant or just simply deeply perspicacious?

As these thoughts reverberated in my mind, the Director went further, “If you don’t mind, I will like to shave your head, and draw the face tattoo to see how you look”, he said. For the record, I really hate being bald because I look awful. But I consented without hesitation. I was offered the role of Tyson’s stunt double and a special caveat, I got to keep my role as military commander. I will never forget that day; it has left me with an indelible memory.

A lot of people aren’t au fait with the crucial roles stunt doubles play in movies. The most breathtaking falls from a high-rise building, that riveting car chase, the impressive helicopter kick that got you bamboozled in the cinema are most likely done by stunt actors. Only a few actors like Jackie Chan and Tom Cruise do their own stunts.

This has sometimes left them with serious injuries, including broken bones. Actors like Brandon Lee, the son of movie and kung Fu legend, Bruce Lee, died on the set of an action movie. An entire movie production can be put on hold for years if there is a serious injury to the main character. Hence, stunt doubles are the unsung heroes of your favorite action movie.

As Tyson’s stunt double, we donned the same costumes and I needed his unique face tattoo. I was quite meticulous in my preparation. I studied the way he speaks, walks, fights, body language etc.

A few days before shooting, I went for a fitting. Looking at the boots and shoes that had been designed for Mike and myself, I was astonished by the size. “There is no way my feet are that big,” I thought. Trying them on brought me back to my childhood days when I would put my dad’s too-big shoes on my little feet. I could barely walk in them.

On shoot day, l was still unsure whether it was all an elaborate prank or maybe I was just daydreaming. Reality sunk in when I was given my script for the first day of shooting and to my surprise, I had scenes with Steven Seagal that included a dialogue and a high-octane fight. What a way to start.

Mike’s travel plans had been delayed, so I was thrust into a more prominent role than I had initially anticipated. The project was time constrained, so they couldn’t wait for Mike’s arrival to commence shooting. As a result, all Steven Seagal’s lines and fight scenes in that movie were done with me, not Tyson. Mike and Steven were never on set at the same time for the entirety of that project. I will divulge more on this later. This is the beauty of film-making.

I was extremely nervous when I arrived on set. There he was, the enigmatic and legendary Steven Seagal. I had grown up as a kid in Sierra Leone watching him in films like ‘Above the law’, ‘Under Seige’, ‘Born to kill’ etc. Now he was right there, in the flesh with his gorgeous wife and young son. That’s when I knew this was no gimmick. It was show time, time to rock and roll.