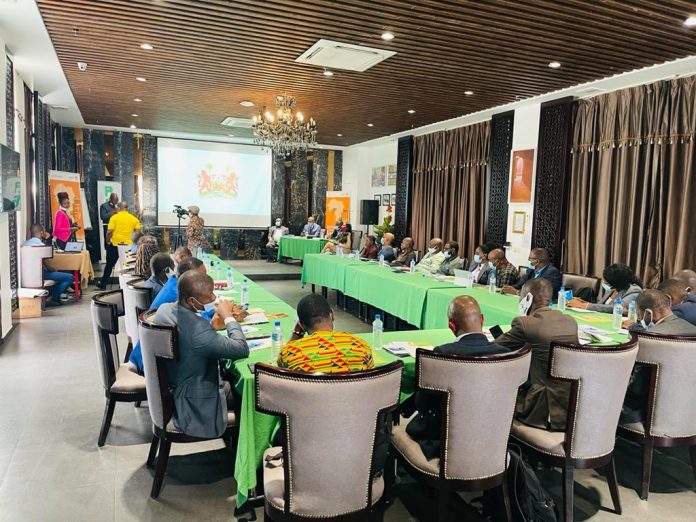 Alhaji Kanja Sesay, Minister of Energy, has spoken on the New Direction administration’s overall policy objective in the energy sector during a workshop organized by the Ministry of Energy and the Africa Clean Energy Technical Assistance Facility (ACE-TAF) at the Atlantic Hotel, Beach Road, Freetown.

The Africa Clean Energy Technical Assistance Facility is a four-year program funded by the United Kingdom Government Department for International Development (DFID) with the primary aim of providing access to clean energy mainly through decentralized and standalone solar systems for the poor in rural or remote communities.

While officially opening the workshop, the Minister of Energy conveyed the greetings of President Julius Maada Bio, whom he described as an ardent supporter of the renewable energy space and program in the country. He said the President had always pointed out to him the need to expand or increase access to energy and to attract partnerships from private sector companies.

Alhaji Kanja Sesay said that it was with a view to complying with the directives of the President as enshrined in the New Direction Manifesto that his Ministry had partnered with the private sector to help create access to energy in particularly rural areas that do not benefit from the grid. He praised the many partners that were working with his Ministry in developing and improving the renewable energy space in the country.

The Minister of Energy maintained that the importance of solar systems cannot be overemphasized, adding that the desire by the Government to provide electricity to rural areas through mini grids had gathered momentum and attracted serious attention. He said there has been a remarkable comparative improvement in access to energy, stressing that by the time the electrification projects in district headquarter towns were completed, the access percentage would be more visible and impactful.

“Under the New Direction agenda, my Ministry has focused on four guideline pillars that will continue to be the basis of energy access :conducting technical audit of the energy sector; undertaking robust reforms in the sector; restoring electricity supply to all district headquarter towns; and investing in low-cost renewable energy potentials of the country in the areas of solar, hydro and wind,” the Minister averred, while assuring citizens of the continuation of the relentless efforts being made in the sector.

Director of Energy in the Ministry of Energy, Ing. Benjamin Kamara, said the Minister is committed to providing modern energy services to every segment of the population, adding that the installation of mini grids is a testimony to the strides taken in that direction. He spoke about the National Energy Policy and the synergy among the utilities-the Electricity Distribution Supply Authority, the Electricity and Water Regulatory Commission and the Electricity Generation and Transmission Company.

Country Manager for Africa Clean Energy, Amie Dumbuya, noted that energy is a critical service and is highly interconnected with socio-economic development and human wellbeing.

She said there are over three billion people in the world that still do not have access to electricity, adding that they were faced with an uphill battle in Sierra Leone in trying to meet the Sustainable Development target of 80% access to energy by 2030. She spoke about the flexibility of standalone solar systems, adding that this system had connected about 152,000 households and had the potential to connect about 560,000 households by 2023.

The program was chaired by the Deputy Minister of Energy, Dr. Eldred Taylor, and in attendance were representatives from Ministries, Departments and Agencies.