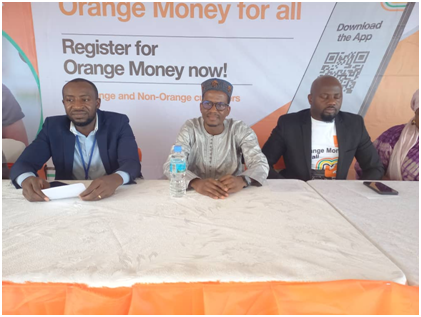 A new Orange Money App, tagged “Orange Money for all”, was launched on the 9th September 2022 at the Orange Sierra Leone Head Office in Freetown. This new app comes with amazing features that make mobile money transactions easy and comfortable.

However, it must be noted that the most innovative and astonishing aspect of the app is the ability of Non-Orange mobile customers/users to use the Orange Money platform through the app.

What this means is that people using other mobile operators sim cards, can now use the Orange Money platform without using an Orange SL sim card, through the app.

Prior to the introduction of the Orange Money App, only users or holders of Orange SL sim cards could be able to use the Orange Money platform, but with the new app, everyone can use the platform as the individual is using a valid mobile sim card of any mobile company in Sierra Leone.

The Orange Money App is now available on Play Store and Apple Store. New Orange Money users can download the app and open a new account to receive and send money and also pay bills.

For instance, an Orange sim card holder can use the Orange Money lending service (Orange Lajor), which allows a user to borrow up to Le 700 from the platform.

He further spoke on the importance of mobile money banking, which among others, are the comfort it provides doing transactions, ease of sending and receiving money, without queuing at the bank.

Launching the official Orange Money App, the CEO of Orange Sierra Leone, Shekou Amadu Bah assured the public that Orange will continue to bring more innovations for their customers, including Orange Money users. “No matter which sim you’re using, you can use Orange Money with the Orange Money App,” he intimated.

Madam Alimatou Mbaye Commercial Director of Orange Sierra Leone congratulated the team and express that her team will also do their part to market the service.

The Chief Marketing Officer, Abdoulaye Dia explained that Orange believes in invention and innovation as the Orange Money team is working tirelessly to support digitalization and access to mobile money.

Head of Marketing, Strategy and Partnership, Abibatu Baxter, took the audience through the App Demo on how to access it on one’s smartphone and she explained what is required for whosoever that may want to use the App.
She started by advising the audience to first download the app and use it on any other Sim.

Explaining how it works, she recommended getting the app on one’s phone by downloading Orange Money Africa which applies for both android and I phone users.
She said by opening the app it asks for one’s number to check if one is registered or not.
According to her,  it will command one to read the terms and conditions, after which it ask for details which includes full name and Identification Number, then  it will send a summary of personal details been entered for confirmation and change the password from default to one an individual is comfortable of using.
Climaxing the launching was a question and answer session which was moderated by Madam Baxter and the Head of Direct Sales, Bollor T Sesay, gave the closing courtesies emphasizing that the influencers should make the message go viral.