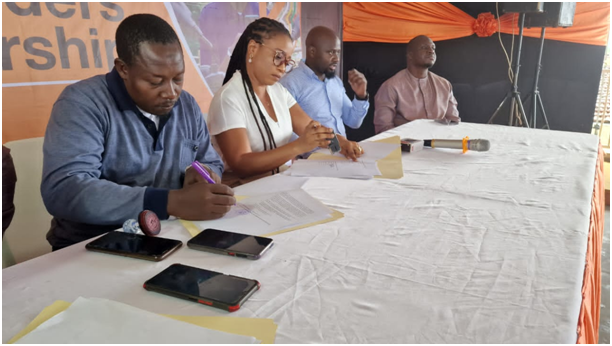 Orange Money Sierra Leone, an appendage of Orange Sierra Leone, has on the 10th August 2022 engaged members of the Bike Riders Association culminating in the establishment of a partnership between the two entities.

The terms of partnership is that the Bike Riders should help in terms of doing advertisement on behalf of Orange Money and I return the company will create a platform through which financial transactions could be made via Orange Money preventing the use of physical cash. Also, Orange Money has consented to complete the construction of a Secretariat for the Bike Riders Association.

Head of Orange Money Marketing Department, Abibatu Baxter, welcomed members of the Bike Riders Association further maintaining that it is good that they will become part of the Orange family through the partnership also expressing hope that the partnership they will forge will positively reflect on the people of Sierra Leone and that the bond which has been formed will continue.

On her part, the Acting CEO of Orange Sierra Leone, Haffie Haffner, intimated that since 2016, one of the promises Orange SL made to the nation was to provide qualitative telecommunications services for everyone. She expressed the conviction that telecommunications services are no longer for the privileged few in society but rather a right to access them and all other associated services that come along with it like Orange Money.

She continued that from that period to now Orange Sierra Leone has being building sites all over the nation which has catapulted them to become one of the biggest telecommunications service providers in the country.

According to her, they are not only building sites but they are building systems that offer qualitative services as well as developing good products that the people will be happy with.

She went forward to say that she knows that many people are using most of their services and products but they are yearning for more inclusiveness adding how they are working towards the enhancement of digital inclusion.

The Acting CEO stated that is why Orange SL is partnering with the Bike Riders Association because they work in unity.

Head of Orange Money, David Mansaray, on his part expressed the wish  that the relationship they have formed with the Bike Riders Association will be sustainable.

He said knowing that in each relationship both parties should help each other, Orange SL has a lot of goodies for the Bike Riders Association maintaining how in return they hope to get their support as well.

David Mansaray pointed out that one of their aims is to provide an easy way for bike riders to do their business and to ensure that everyone becomes a winner at the end of the day.

President of the Bike Riders Association, Umaru Talie Bah, after introducing members of the Executive team stated that they are ready to work with the company especially as the company has agreed to complete their head office building expressing gratitude for the partnership that has been formed.

1st Cohort of 32 Students Graduate from the Orange Digital Centre