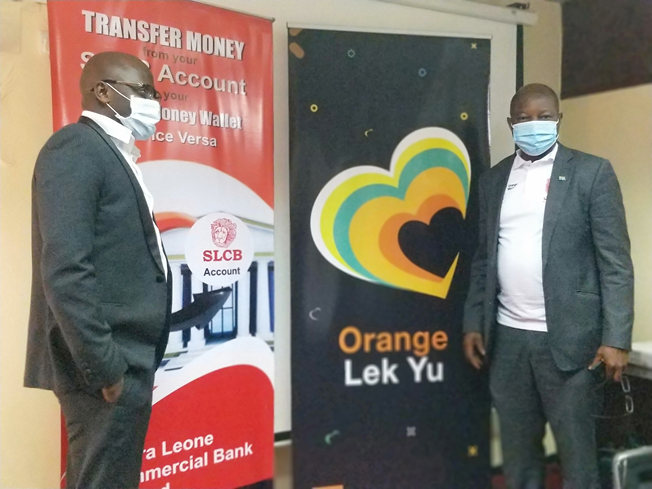 In a bid to enhance financial inclusion in the country, Orange Money in partnership with the ‘People’s Bank’ that has the widest customer base in the country, the Sierra Leone Commercial Bank (SLCB), has on Wednesday 12th August, 2020 launched a modern and convenient electronic money service conduit known as ‘Bank to Wallet’ at the Bank’s Headquarter on Siaka Steven Street in Freetown.

In his address, Managing Director of SLCB, Abdul Fidelis Turay said that launch of the service or product is a clear manifestation that SLCB is taking the lead in actualizing the Government’s objective of enhancing financial inclusion in the country. He underscored the significance of the partnership saying such an alliance is designed to reach out to a large customer base both in the formal and informal financial sectors.

He said SLCB-Orange Money Bank to wallet/ Wallet to Bank (B2W/W2B) product is one that will ensure that SLCB’s customers have access to their monies on a 24/7 basis from wherever they have  Orange network and do so at their comfort.

He noted that the advantage of this electronic platform is that it reduces transaction time, preventing going to a banking hall maintaining that just by using mobile phones, access to monies in customers’ SLCB’s accounts is now at the customers’ fingertips, adding that as the people’s bank, they are committed to support the Government’s efforts in keeping all of its citizens safe while providing the essential services they need to manage their daily lives.

“The B2W/W2B product is one additional step that SLCB in partnership with Orange Money has taken to ensure that the Government’s safety objects are supported,” he furthered.

He said that customers no longer need to physically visit the bank in order to transfer money to someone whether they are their customers or not but with this product, any SLCB customers can now do such transfers from their linked bank account to their mobile wallet and vice versa with ease.

He encouraged their customers to continue to be safe and use the service to conduct their financial transfers anytime because SLCB and Orange now have a partnership that is formidable and far reaching.

On his part, Chief Executive Officer, Orange Money, David Mansaray disclosed that the Bank to Wallet is a means of transferring money from a customer’s SLCB Account to his/her Orange Money wallet and vice versa.

“It is a mobile money service which Orange Money subscribers can use to withdraw and deposit cash from SLCB Accounts to Orange Money Wallets and vice versa,” he reiterated.

He added that the two institutions are equally excited for the partnership as both have the biggest customer bases in the country.

David also stated that the partnership is one of the strategies to enhance broader and wider access to financial inclusion as the two institutions will make that happen in the country.

According to him, the service will save the customers time and transportation to go to banking halls as well as avoid long queues.

He called on all, including teachers, nurses and other civil servants working in remote communities to take advantage of the service in reaching their families at their convenience.