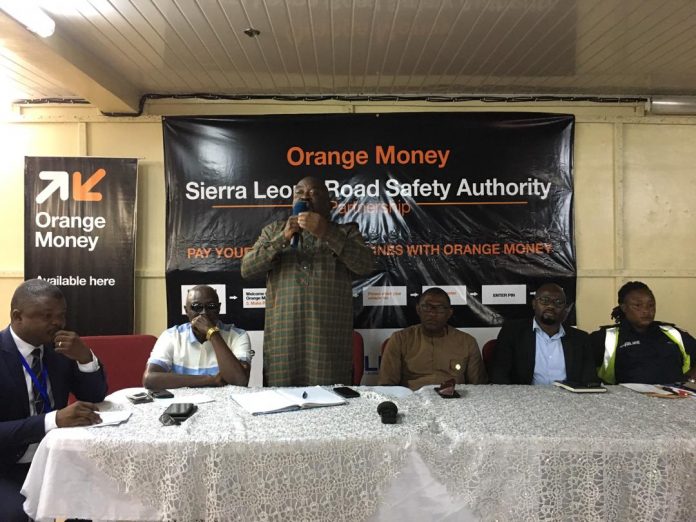 The Sierra Leone Road Safety Authority (SLRSA) on Wednesday 6th November 2019, at the John James Hall in the East End of Freetown entered into partnership with Orange Money for payment of fines to be paid for violation of various traffic offences by using Orange money transfer.

In his statement, David Panda Noah, Executive Director of SLRSA said, they are working in line with His Excellency, President Bio’s vision to move this nation to a digital stage, saying this new arrangement will enable members of the public to pay SLRSA ticket fines.

He added that it will also help someone check if his/ her vehicle has been issued a ticket, how much one has to pay and to also do other transactions.

Noah disclosed that the use of Orange Money platform to generate income will improve on its revenue mobilization with cheaper cost and as well reduces the tendency of corruption.

The Executive Director said in order to reduce the risk of accidents, especially by Bike Riders who after incidents normally run away when they are stopped by Road Safety Corps or the Police, SLRSA has introduced flying tickets which will be issued to those who have perpetrated traffic related offences.

He said a text message of notification will be sent to an individual via Orange Money, stressing that such fines must be paid within 72 hours. He commended Orange Money and the MIS team at SLRSA for such a hard work.

David Mansaray, Orange Money CEO, said Orange, as a leading telecoms company, is not only here to provide telecommunications service but to also contribute to national development.

The partnership, he said, will help boost revenue generation for SLRSA like other institutions and organisations that are working with Orange Money, emphasizing how it will cut down on cost and create room for accountability.

He also stated that with the new digital age, Orange Money SL has a lot to offer from which SLRSA will benefit from. He thanked the Management of SLRSA saying it takes a visionary leader to employ such a facility.

Alpha Amadu Bah, President of Sierra Leone Drivers Union, thanked SLRSA and Orange Money for signing such a partnership, which he said, will help save drivers’ time. He said as a Union, they are using Orange money to collect dues. Abibatu of Orange Money said customers with registered Orange Money SIM cards should go to the menu and use the short code #144# which will take them to many options.

She said any individual could select Option 3 which is to make payments and then move  to t other options; but to select 4 which will show where one should enter a vehicle registration number and get access to other relevant information as required.

Delivering the keynote address Deputy Minister of Transport and Aviation  Sadique Sillah  thanked Orange SL for the leading role it is playing to help complement government’s efforts to develop this nation.

He stated that the transportation sector  is the second largest employment sector in the country which is why Sierra Leone’s economy cannot do without the serious contributions by that sector.

“The partnership is good because it fits within the Fourth Industrial Revolution. As a Government we are moving with the digital technology because it is a low risk to corruption. We need educated drivers because most of the vehicles coming into the country are highly technological and very soon we will introduce machines for proper vehicle testing and it will also be used in private garages. We need to improve on our transportation sector like other countries and we are now removing metal seats in vehicles,” he stated. 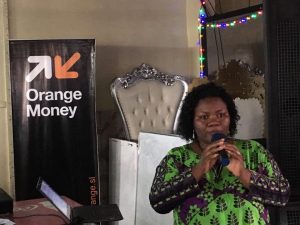