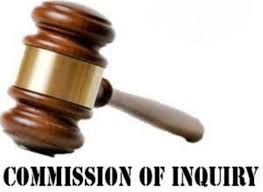 Commissions of Inquiry have become preferable mechanisms used to hold past Government officials to account. While such form of accountability promotes democratic governance, it can also affect national cohesion. This is the case in Sierra Leone. After the multitier elections (local council and presidential elections) in March 2018, the victorious Sierra Leone People’s Party, which formed the New Direction Administration, established Commissions of Inquiry to hold its predecessors to account. Though two-third of the country’s population welcomed the move (IGR’s Voices &Views Report on COI, 2019,pp.3), it was however, classified by the outgone All People’s Congress Party, as a political witch hunt. This further exacerbated the existing primordial division between the two traditional parties.

Several reasons exist for this exacerbation, apart from the establishment of the commissions; hereinafter, the ‘COI. ‘ First, the major opposition party (APC) argued that the New Direction Government Transition Team Report (GTTR), which recommended the establishment of the COI, was flawed. The report included names of individuals to be held accountable who were not even in governance at the time, as stated in the report. Additionally, the report or some of the authors of the report labelled past Government officials as ‘ criminals’ which to them, is a usurpation of the powers of the court of law.

Third, the APC also claimed that both GTTR and COI represented a clear move by the New Direction Administration to destabilize their party. Although violent conflict is yet kept at bay, the ensuing contradiction succeeded in creating political and ethnic tension in the country; further escalating the political division between the Northerners and the Southerners. However, the claims put forward by the major opposition party, can be argued. For instance, while it is indeed true that the number of Northerners investigated far exceeded that of Southerners, this was not unexpected since Northerners held more political positions than Southerners in the past regime- the negative effect of the ‘winner takes all’ politics.

Only few loyal and trusted Southerners made it to the hierarchy of the past administration. Similarly, the claim that the Temne and Limba were ‘deliberately’ targeted by the New Direction Administration could not be entirely true. The aforementioned groups have been historical supporters of the APC party. As such, they have always been in majority in more or less all branches of the party’s political processes. And the Mandate of the COI was to investigate key government officials who served in the past administration. The polarized circumstance has already affected the country’s national cohesion, and will get worst depending on the nature of the Government’s final decision on the reports of the COI.

Certain measures could however, be taken to bridge the division between the affected communities; now that the commissions have completed their investigations. Going forward, there should be a consultative dialogue involving the two major political parties. This should have a reconciliatory face during which parties will be allowed to constructively air out their grievances. Such a move must be made by the ruling party. Although the Bintumani three had some effect, a more bipartisan approach is needed.

Moreover, inasmuch as massive corruption was discovered by the COI, care must be taken with regards the scale of punishment given out. Interestingly almost all major politicians in the past administration were found wanting by the COI- including the former President.

Some sections of the public recommend forfeiture of all properties and a five to ten years jail sentence or ban from active politics of guilty persons. But with the kind of regional division and fragile political situation, such punishment has the tendency to trigger conflict and further divide the nation. For Peace to prevail, having guilty persons refund misappropriated state resources will be quite enough.

Finally, due process must govern the entire accountability process. Final state decision must not be made based only on the findings of the COI. Accused persons must be allowed to appeal the charges before the court of law. This will promote fairness and public satisfaction of the entire process.

In conclusion, albeit that the major opposition portrayed the ongoing accountability process as a political witch hunt and attack not only on their party, but also on northerners, some of their claims however, are arguable as such corruption allegations have even been raised by numerous Auditor General’s reports under their administration. Similarly, the argument that northerners were deliberately targeted by the COI is also not a good one, as northerners had preference in the past administration. Above all, as the situation gets even more polarized with the completion of the investigations, the Government, in collaboration with civil society should organize a consultative meeting aiming at bridging the resulting polarization.