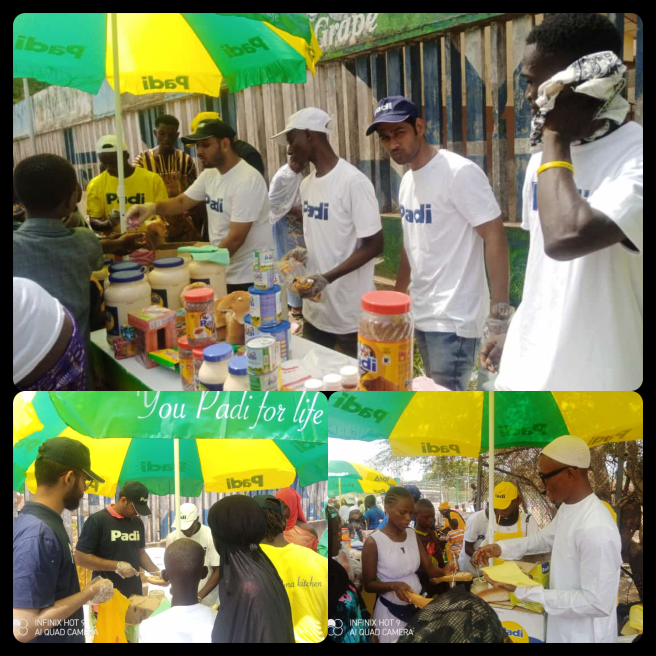 Padi business entity, a manufacturing company that produces assorted food items and toiletries in partnership with the One Deen Foundation offered 3000 loaves of bread, with a spread of Padi Mayonnaise, to Muslims, and 50 special packages of Padi products to Imams and dignitaries, and Padi biscuits and sachets of water to children after the Eid prayer which was observed on the 2nd May, 2022, at the National Stadium in Freetown.

Apart from their amazing products, Padi, as a company, is well known for its charitable work and for also promoting local artists of the country’s entertainment industry.

The Public Relations Officer of the company, Wahida Sesay, intimated that as the name implies ‘Padi’ means someone who is friendly underscoring that the kind gesture is a clear demonstration of the love that the business entity has been extending to the people of Sierra Leone and a reminder that the company is strongly with them.

According to her, it is not the first time that the company has undertaken such a venture adding that they have done a lot of other charitable work.

She also dilated on how the company has tremendously supported the entertainment industry stating how it was very prominent in supporting the just concluded Big Sister Show and also mentioned the signing of famous artists in the country in the likes of Drizilik, Krack Twist and Samza to undertake the promotion of the business entity.

According to her, they have done a lot in terms of education citing the dishing out of packages to pupils in different schools in the country.

“We have partnered and sponsored different organizations in the country,” Wahida also disclosed.

“As a way to show how we respect religious tolerance and extend love to our Muslim brothers and sisters we decided to offer this token of love to them. As we give, we believe the blessings are coming back to us,” She asserted.

The Public Relations Officer further maintained that they are not only receiving profits from business transactions but they are also giving back to society.

” We will continue to show love and support to the people of Sierra Leone,” she assured.

Sheikh Alie Kallay, the National Public Relations Officer  of the Sierra Leone Muslim Congress said, on behalf of his colleagues, expressed appreciation to the company for what he described as a kind gesture stating that the products are Halal , which according to him means things  not harmful to human beings.

He continued that they are happy to receive the packages which will benefits them and their loved ones.

Amadu Jagitay, the Managing Director of One Deen Foundation,  said  it is not their first time that they have  partnered with the company maintain that as a Foundation they have the platform to market the products of the company.

He challenged that beneficiaries who will for the first time taste the Padi Mayonnaise will definitely go in search  for it and the other products that the company produces.

Rugrats Kamara, one of the beneficiaries, said she is impressed by the laudable venture of the company and expressed gratitude for benefitting giving assurances of always purchasing products of the company.

Another beneficiary, Fanta Kamara, said on behalf of her kids, who also benefited from the gesture,  they are grateful to the company for what they did saying  for those who rushed to the Stadium to pray did so without eating but said when leaving they ate as a result of the offer by the company.