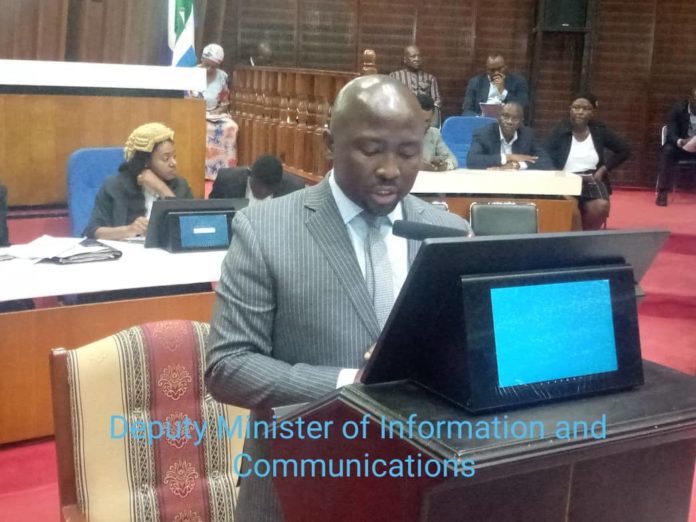 He said the agreement is geared towards the operation and maintenance of the landing station of the fiber cable adding that the process of awarding the contract was in the competitive bidding process and it was a cabinet decision for the unbundling of SALCAB in order to have effective internet connectivity.

The Chairman of the Parliamentary Committee for Information and Communications, Hon. Boston Munda stated how the agreement has a lot of opportunities for the people of Sierra Leone adding that the liability that was incurred by the SALCAB Management has been paid by the Management of Zoodlabs.

On his part Hon. Latiff Sesay said he is one of the people who were in opposition to the dismantling of SALCAB, but after realizing the bad shape of latter, he concluded that Government took the right decision in awarding the contract to Zoodlabs. He commended the Management of Zoodlabs for improving internet connectivity in the country.

Hon. Joseph William-Lamin spoke on the standard performance of Zoodlabs and applauded their operational activities in the country.

Hon. PC Bai Kurr Kanagbaro Sanka III questioned the operation of Zoodlabs, prior to parliamentary approval of their agreement and went on to decried certain aspects of the agreement.

Hon. Ibrahim Ben Kargbo said the idea of the agreement is to improve on the technology of the State and used the opportunity to give a historical background of the landing of the fiber optic cable in Sierra Leone. He commended the Ministry of Information and Communications for providing an alternative that is geared towards the improvement of internet connectivity and noted that the agreement is “non-controversial”.

Hon. Dr. Mark Momoudu Kalokoh commended the Zoodlab’s agreement and referred to the agreement as “a good one”.

Rounding up the debate, the Leader of Opposition, Hon. Chernor R.M. Bah, said there are no perfect agreements, but reiterated that Zoodlabs agreement is a good one. He encouraged the Minister of Information not to delay agreement of this nature in the future. He said since there are clauses in the agreement that talk about reviewing; he requested the Deputy Minister to inform the House for any future challenges, in order to address them.

In concluding the debate, Leader of Government Business Hon. Mathew Sahr Nyuma commended the opposition Party and colleagues MPs for mounting pressure for the laying and approval of the Zoodlabs agreement in light of its procedures. He accentuated the positive effects of the agreement on the socio-economic development of the State, whilst underscoring a proper oversight on Zoodlabs operations.