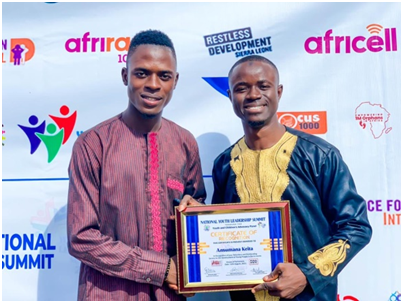 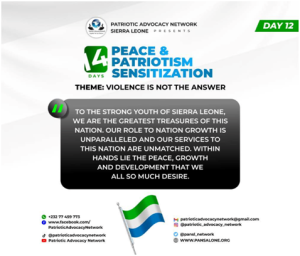 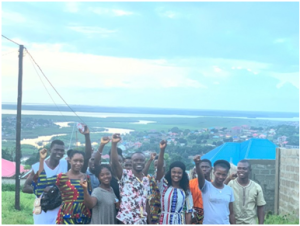 The campaign is geared towards creating awareness among youth to develop the spirit of patriotism, unity and national cohesion. The campaign also advocates against violence and tribalism in Sierra Leone.

Speaking to this medium, the Executive Director of PAN SL, Ansumana Keita said that since the formation of the organization in 2013, they have been organizing campaigns on the danger of tribal hate speeches and violence.

He added that they have been engaging young people in several schools and communities across the country on the relevance of patriotism and peace.

Keita intimated that prior to the 8th, 9th, and 10th of August protests in Freetown and other parts of the country, they had been calling on youth across the country not to involve in any form of violence and have also been encouraging youth to embrace peace.

“With great dismay, we condemn all acts of violence that transpired before, during, and after the said violent protests which include the sending of inciting audios on social media, using of invectives and words of incitement in public places, firing of teargas and live bullets, pelting of stones, burning of police stations in different locations and tires, looting and destruction of properties. Let’s be reminded that our country had once tasted the bitterness of war and we are still romancing with its predicaments. As a nation, it is clear that violence leads to perpetual pain, suffering and above all does trek a nation from progress. Therefore, violence in all form and shape is unwelcomed, unacceptable, and unreasonable. Violence has no room in our society and violence is not the answer,” he stated.

The Chief Patriot, Keita urged all Sierra Leoneans, especially the youth, to stay out of violence in all forms and also called on the Government to engage in dialogue with various stakeholders in the country to see how best they can address the issue of violence.

The Campaign is expected to be extended to September during the celebration of International Peace Day.

In another development, during the 5th Edition of the Sierra Leone National Youth Leadership Summit 2022 pioneered by the Youth and Children Advocacy Panel (YACAP) on Friday, 19th August 2022 at the House of Parliament, Ansumana Keita was awarded Male Youth of the Year for his relentless and outstanding service to the development of young people in Sierra Leone.

The event saw over 500 youths across Sierra Leone discussing pertinent subjects geared toward Youth in Peace Building and Conflict Resolution and proffered endurable and sustainable remedies to issues affecting youths from diverse facets to which Ansumana Keita contributed greatly.

The Founder and General Overseer of Patriotic Advocacy Network Sierra Leone (PAN-SL) had been positively contributing to the progress of hundreds of youth across Sierra Leone over a decade now.

Commenting on the award, Ansumana Keita stated that he is overwhelmed saying he was not mindful of the honour but said he truly appreciates it. Keita said this gratitude and esteem have again heightened and strengthened him to never relent in his developmental oriented endeavours as it is for the youth that he is going extra miles as that is what gives him joy. Keita dedicated the award to his late Father, Mr. Foday Keita and Sierra Leoneans that lost their lives in the August 10th protest.

WAYN & PAN-SL Holds ‘Say No To Corruption in Schools’ Campaign