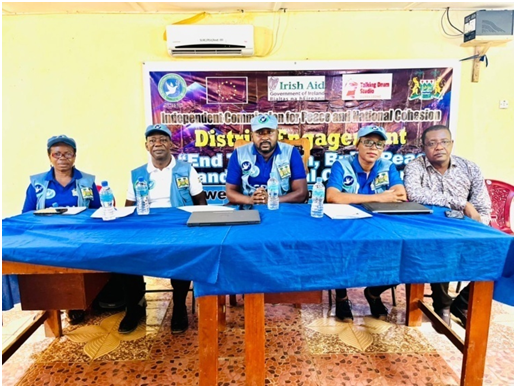 The Independent Commission for Peace and National Cohesion (ICPNC) has commenced its district engagements targeting various districts in the country.

The district engagements are part of efforts to formally introduce the Commission to the people at district level and to brief them about the Commission’s undertakings since its inception, it plans and to discuss how as a people can be part of the Commission’s  goal of ensuring peace and national cohesion.

In attendance during the meeting held at the Kambia District Council Hall were the Paramount Chiefs from Magbema, Masumgbala, Mambolo and Gbinle,  Chiefdom Speakers, youth and women’s groups, students, civil society, bike riders and motor drivers unions, the disabled and war wounded and other community stakeholders.

The Director of Conflict Resolution and Management, Charles Lahai, did a short presentation on the background to the formation of the Commission, the 20th anniversary of the Peace in Sierra Leone as well as the International Day of Peace which will be commemorated by the Commission and it partners on the 21st September on the theme: “End Tribalism, Build Peace and National Cohesion”.

He also spoke about the 11-year war, its consequences on the country and the structures put in place thereafter to address some of the causes that led to the war, including the setting up of the Truth and Reconciliation Commission.

He said that the Peace Commission, whose main objective is to develop  strategies  for conflict resolution, prevention and management will also address some of the recommendations of the TRC in order to promote lasting  peace and national cohesion

The host Paramount Chief and Paramount Chief Member of Parliament for Kambia district, Pc Bai FaramaTass Bubu Ngak11 lauded the decision by the Management to take the Commission to the districts as well as engaging the people, which he said is long overdue.

He commended the Commission for the work done so far despite being in existence for a short time and reiterated the importance of peace to the development of the country.

The Chief told the meeting that Kambia has been one of the most peaceful districts in the country, because they as chiefs from the various chiefdoms have always endeavored to work as one, putting the interests of their people and the country first.

PC Farama Tass said that despite the cosmopolitan nature of the Kambia the district has remained united with inter-marriages and even people from other parts of the country well integrated into the community, making Kambia a model when it comes to national cohesion.

Speaking on the theme of this year’s International Day of Peace, the Paramount Chief Member of Parliament said the problem in Sierra Leone is not tribalism, but politics, which according to him has been the main cause of our problems.

“Let people put politics at the backseat of this country because it is the main driver of conflict in the country,” he admonished and reiterated his commitment and willingness to work with the Commission whenever called upon.

His sentiments were re-echoed by the other Paramount Chiefs and local authorities who also urged the Commission to continue its engagement noting that the people have a key role to play in the work of the Commission for it to succeed.

As custodians of peace, the Chiefs spoke of their common aspirations to bring development to their districts and pledged to continue working together to maintain peace in Kambia district, as well as consolidating peace in the entire country.

Representatives of women, youth, civil society, the transport sector and students groups, while stressing the importance of the Commission, spoke on the need for them as key stakeholders to be involved in the work.

A representative of the war wounded called for more attention to be paid to them as well as for the full implementation of the recommendations of the Truth and Reconciliation Commission.

The Executive Secretary of the Commission, Hawa Samai, while commending the Chiefs and other stakeholders for responding to the Commission’s invitation assured that the Commission will ensure that the people are part of its activities pointing out that the staff cannot do it alone.

She disclosed plans for the creation of the “Most Peaceful District”, where prizes will be given to the most peaceful district in the country, which is also part of efforts to promote a culture of peace in the country.

The Director of Communications in her welcome address earlier said the large turnout of especially Paramount Chiefs was a clear manifestation of their commitment to the peace and stability of the county.  She acknowledged the importance of local authorities to the sustenance of peace saying she looks forward to their continued support for the work of the Commission.

The Deputy Executive Secretary, Moses Margo, the Director of Conflict Prevention, Philip Bona and the Director of Monitoring , Evaluation and Learning at the Peace Commission, Lilian Wilberforce, made meaningful contributions during the programme.

A Similar engagement was held in Port Loko district on Thursday which was day 2 of the district engagement.

The meeting at the Red Cross Hall in Port Loko city was also graced by a large number of local and traditional leaders from Maforki, Bakeloko, Sanda Magbolontor and Marampa chiefdoms and other stakeholders.

The Chiefdom Speaker of Bakeloko, M A Tarawally, reiterated the timeliness and importance of the Commission and appealed for the commission to be given the necessary support to make it effective. The district engagements continued in Bo and Moyamba.

A key highlight of the engagement was the identification of key Civil Society Organizations in the various districts for the setting up networks/coalitions which the Commission can work with, leveraging on their expertise and understanding of the issues in their respective districts.