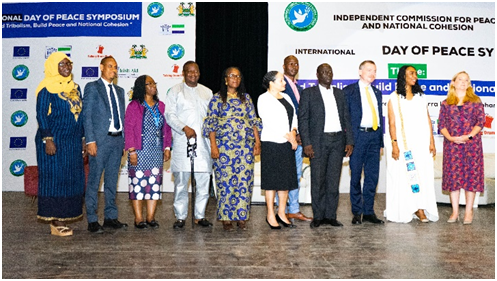 In his welcome address, Alhaji Musa Salam Conteh, Board Member of the Independent Commission for Peace and National Cohesion said that the day was set aside by the United Nations devoted to strengthening the ideals of Peace through the observance of 24 hours non-violence and ceasefire.

He pointed out that this year’s International Day of Peace global theme is “End Racism, Build Peace” but in Sierra Leone ICPNC has chosen the theme: “End Tribalism, Build Peace & National Cohesion” because of  the recent spate of tribal rhetoric and statements especially on social media that have the potential to spark violence in the country.

He stated that the Commission through the symposium will address the dangers of tribalism and also admonished Sierra Leoneans to desist from any act that might bring division in the country but rather promote peace and cohesion because without peace there can be no development.

The Board member maintained that the Commission has as its mandate proffering advise to Government on all aspects of conflict resolution and peace and adopt measures to promote and facilitate the full implementation of recommendations, promote peace, reconciliation, and unity in Sierra Leone, build a peace culture, enhance tolerance, and support peaceful resolution of conflicts throughout Sierra Leone etc.

He continued that the Commission has validated its three (3) year Strategic Plan-2022-2024 for the promotion of peace and national cohesion in the country.

Ambassador of the EU, Manuel Muller, stated that as a representative of the European Union celebrating International Peace Day also reminds him of a former French Foreign Minister, Robert Schuman, whose project, he said, shaped what today has become the European Union which is  an economic and political actor globally.

He pointed out that Sierra Leone has made notable progress in consolidating peace and democratic governance since the decade long civil war ended in 2002 which he said includes the successful administration of four elections, a peaceful transfer of power in 2007 and peaceful presidential, parliamentary, and local council elections in 2012, and subsequently a peaceful transfer of power in 2018.

The EU Ambassador maintained that Sierra Leone has chosen to continue to address underlying challenges in the country and to increase the solidity of democratic norms. He added that there is no development without peace, furthering that democracy and peace are two sides of the same coin and indeed the cornerstone for sustainable, resilient and prosperous nations across the world.

“The European Union as a reliable and strong partner of Sierra Leone has supported the country’s transition from the brutal decade-long civil conflict to a nation that is working towards building its democracy, despite the challenges,” he revealed.

The Leader of the Main Opposition APC Party in Parliament, Chernor Maju Bah, described the symposium as very important towards enhancing peace in the country. He said that violence doesn’t benefit anybody of which he said that peace is very important and that it cannot be negotiated.

The Opposition Leader urged the Commission to create a levelled playing ground for all regardless of tribe, region, or political belief which he said will enhance peace and stability in the country.

He said that dialogue is the solution to the current problems the country is faced with of which he called for genuine dialogue.

He pointed out that it is the responsibility of all citizens to build sustainable peace in the country adding that peace is the driver of development.

“Let us move beyond the International Day of Peace, let us go back to our communities and preach peace as peace is the bedrock of development and prosperity and let us all work in the interest of Sierra Leone,”  he concluded.

Giving the keynote address on behalf of the Vice President of Sierra Leone, the Minister of Political and Public Affairs, Ambassador Foday Yumkella, said that the International Day of Peace is celebrated globally to encourage all humanity to commit to peace above all differences and to contribute to building a culture of peace.

He added that the Independent Commission for Peace and National Cohesion has chosen the theme: “End Tribalism, Build Peace & National Cohesion” of which he stated that it is very important for us as a nation to build peace and enhance national cohesion in the country.

The Minister called on all Sierra Leoneans to commit themselves towards building sustainable peace in the country.

Climaxing the symposium was a panel discussion on the theme. Panelists included representatives from the Inter Religious Council, Youth Council, Labour Congress, Council of Paramount Chiefs, SLAJ and the National Coordinator of WANEP. 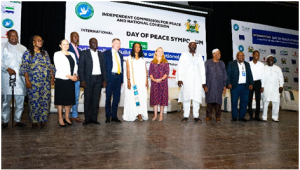