In a bid to raise awareness on flood mitigation, CARE-Sierra Leone in Partnership with Health Alert and the National Disaster Management Agency (NDMA) on Wednesday 21st September, 2022 held a one-day Stakeholders engagement meeting and sensitization on flood mitigation at Old Wharf Community in Wellington, East End of Freetown.

The one day Stakeholders engagement, which attracted stakeholders from the Bottom Oku Community, Joshua Community and Old Wharf Community was geared towards raising awareness on flood and disaster mitigation in those flood prone communities.

Addressing the gathering, the Project Officer of Health Alert-Abdul Karim Sankoh emphasized the importance of organizing such Community Stakeholders engagement and awareness raising.

He maintained that the meeting was borne out of an initiative that emanated from CARE-Sierra Leone with funds from Start Fund to engage disaster affected communities in Freetown like Wellington community with various support including donations of food and non-food items, simultaneously with sensitization on how disasters like flooding could be prevented in these communities.

He said Health Alert, as an advocacy organization on Health and Human Rights, was contacted by CARE- Sierra Leone to engage the communities through meetings, mass sensitization, door to door meeting, among other activities, all geared towards mitigating flood and other emerging disasters of which he disclosed some of the preventive measures needed to be taken by community residents to avert disasters which are but not limited to construction of drainages, maintenance of those drainages, proper hygiene practices etc.

He elucidated further that community people are in the habit of blocking the water runways to erect buildings, dumping of wastes in drainages and cutting down of trees.

As a result of these harmful environmental practices, he furthered that communities have been exposed to flooding and other disasters especially during the rainy season, continuing that therefore, in order to ameliorate disasters like flooding and mudslide, community stakeholders need to be capacitated with the right information that will influence behavioral change.

He called on stakeholders to serve as ambassadors in ensuring that the message is cascaded to everyone in the community as they’re influential people in their various communities.

The Western Area National Disaster Management Officer, Sylvester Tch, expressed profound thanks and appreciation to CARE-Sierra Leone and Health Alert for the community engagement which he described as timely and worth the effort.

He expounded on the most common forms of disasters like fence collapsing due to improper construction, houses are burnt down due to substandard used of electrical cables, flooding due to the blocking of the waterways, people building houses under bridges and culverts are causes for some of the many disasters across the country and it’s obvious that are caused by people.

He noted that Government, NGOs and Civil Society Organizations bringing support to affected victims of disasters cannot replace every missing property or lives and they may end their support when things go worst which is why as community residents it is their responsibility to take good care of their communities.

Teh encouraged stakeholders present to be watchful over their communities and be prepared to serve as community ambassadors.

Chief Conteh stressed on the need for such stakeholders engagement particularly in a time like this adding that Old Wharf Community was a flood and disasters free community during the early Sixties unto the Nineties when people were mindful of the environment and their surroundings.

He assured Health Alert and Partners of his commitment to cascade the message to others that were not present in the stakeholders’ engagement and to also form some bye laws in order to ameliorate flooding and other disasters that have befallen them.

During the engagement community members highlighted some concerns which include residents building their houses close to the sea and these houses are stopping the water from passing and that the process of selling and acquiring lands to build houses in the community is another problem.

A community resident also called on Government or NGOs to construct drainages for them in their communities which he said would help to solve the flooding problem in various communities. 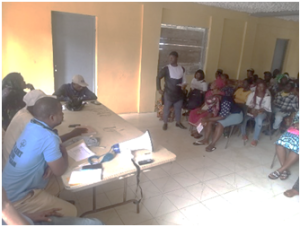