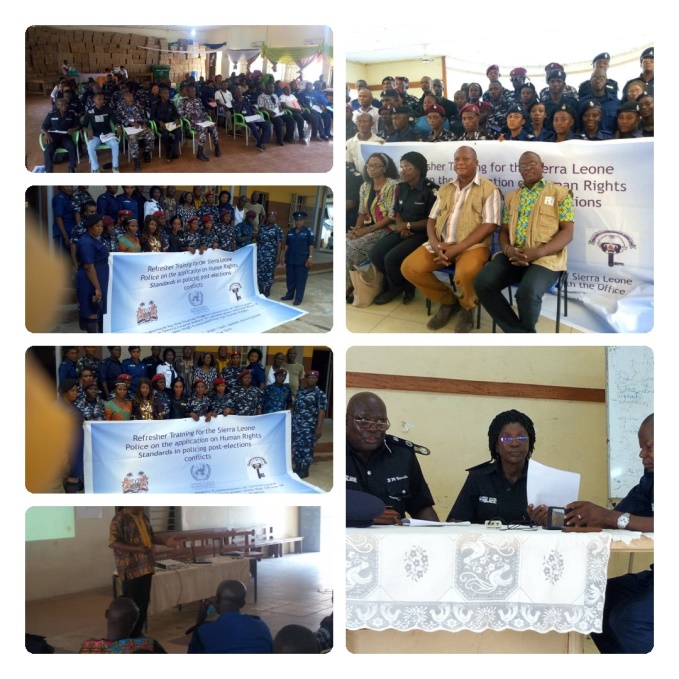 Police officers across the country benefitted from one week refresher training that was organized by the Human Rights Commission on the 9th March 2019. The training was based on application of human rights standards in policing post-election conflicts.

The refresher training was conducted in collaboration with the Sierra Leone Police with support from the Office of the High Commissioner for Human Rights (OHCHR). 50 officers were re-trained in Kambia, Makeni, Pujehun, Port Loko and Bo making a total of 250 police officers.

The objective of the training was to strengthen the capacity of Police Officers on the application of Human Rights in policing operations and the appropriate use of force and firearms.

In Sierra Leone, many security actors are involved in handling security matters before, during and after election. All security institutions do play one role or the other to help the police cope with election challenges. They play their roles with the understanding that police has primacy in the provision of internal security and maintenance of peace and stability as enshrined in the 1991 constitution of Sierra Leone.
Considering the fact that the police force is the principal factor in ensuring internal safety and stability, personnel must be capacitated with an all-round knowledge in Human Rights issues.

The reason for this is that they find themselves trapped in a web of dilemma between Law Enforcement and Human Rights. It is the duty of all officers to ensure that their colleagues uphold the ethical standards of their profession.