Sonia Bobanie-Brown ,one of the lawyers working for the Legal Aid Board (LAB), secured the discharge of a nine-month pregnant Guinean national, Fatmata from the High Court Holden in Freetown presided over by Honourable Justice Sulaiman Bah.

Prior to her discharge the twenty-one year old Guinean national said she has been at the Female Correctional Center at the former site of the Special Court for Sierra Leone in Freetown for almost seven months on a one-count charge of Child Stealing contrary to Section 56 of the Offences Against the Persons Act of 1861. Apart from the aforesaid, the Legal Aid Board beneficiary also revealed how she was detained at the Eastern Police Station in Freetown for approximately ten days before being charged to court on 24th July 2019.

Fatmata went on to state that despite the long time at the remand prison, she only made six court appearances. Legal Aid Counsel, Madam Bobanie-Brown secured her discharge in February 2020.

Asked how she feels after being released from prison, Fatmata stated that she was delighted to be out of incarceration, more so as the time for her labour is getting closer. She thanked the Board for coming to her aid, noting that before then life has been difficult for her especially bearing in mind that she has not got enough resources to hire the services of a private lawyer.

Fatmata informed the Legal Aid Board of her intention to travel back to her mother land of Burfin, in Guinea, stating that the man that got her pregnant during her stay in Freetown has abandoned her since her arrest last July.

Ms. Carlton-Hanciles told Fatmata that she was represented by the Board because nationality is irrelevant in accessing the scheme. “We are blind to nationality,” she said. “Any poor person living in Sierra Leone qualifies for the scheme. It does not matter which part of the world you were born.”

In addition, Ms. Carlton-Hanciles also assured her that the Board will repatriate her to Guinea. “This is a facility we accord our Sierra Leonean clients, you too should benefit from it,’ she said. ‘We have a partnership agreement with the Sierra Leone Motor Drivers and General Workers Union to assist with free transportation for our clients wishing to return to their homes upon serving their sentences or discharge by the Court.”

In another development, a group of women petty traders in the Western Area, The Community-Based Justice Advocates, under the guidance of the Lady Ellen Women’s Aid Foundation (LEWAF), presented a resolution to the Executive Director of the Legal Aid Board, Ms. Fatmata Claire Carlton-Hanciles at a ceremony at the head office in Freetown.

The resolution called on the Legal Aid Board to help ‘End dubious out-of-court settlements and compromise for Rape and Sexual Penetration cases by family members, local chiefs, community stakeholders and sometimes even the police’.

It also called on the Board to ‘Support the enforcement of Maintenance Agreements subscribed to by fathers in respect of wife and child abandonment cases.’  This it underlines entails the Board taking legal action against men who willfully abandon their wives, partners and children. “Madam, it is our experience that men deceitfully agree to sign maintenance agreements at police stations or with legal aid providers only to abandon mothers and children without support in the months ahead,” the Resolution notes.

The resolution further notes that there is growing evidence of non-compliance noting that about 80% of maintenance agreements are abandoned by men. Surprisingly, the complainants are complicit in some of these cases.

In response, Ms. Carlton-Hanciles said she is impressed with what LEWAF has achieved as a legal aid organization and pledged the support of the Board in addressing the issues raised in the resolution. She noted that the issues are close to her heart and therefore done a lot of work in these areas not least at the Legal Aid Board.

In furthering its work the Legal Aid Board and the Initiative for Creative Women (ICW) have agreed to forge a partnership to support and empower women serving time in correctional centers to rebuild their lives and make them become self-reliant.

The Chief Executive Officer of ICW, Binta Bah said her organization is implementing a project ‘Girl Innovation Center’ dedicated to training female inmates in the requisite skills that will earn them a livelihood when they return to mainstream society after serving their sentences. ‘We will train young female inmates in Tailoring, Bead Making, Weaving and Bag Making,’ she said.

She also intimated Ms. Carlton-Hanciles  about activities her organization will be undertaking to mark  International Women’s Day on the 8 March 2020 under the theme: ‘I Can Make a Change: My Story, My Voice.’ The campaign will focus on issues around Teenage Pregnancy, Early Marriage and Domestic Violence.  She added that the celebrations will take the form of screening of documentaries and live drama performances.

The Executive Director of the Legal Aid Board, Ms. Carlton-Hanciles welcomed the partnership with ICW. She said the partnership is coming at a time when the Board is looking for an organization to train in basic skills female clients of the Board who have served time in correctional centers.

The meeting was climaxed with the presentation of a Certificate of Appreciation to Ms. Carlton-Hanciles for mentoring and serving as a motivational speaker for young Women in the three day Leadership and Development Summit in June 2019. 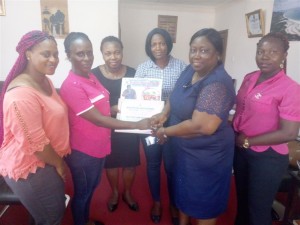 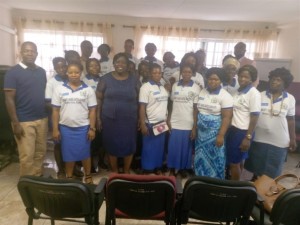