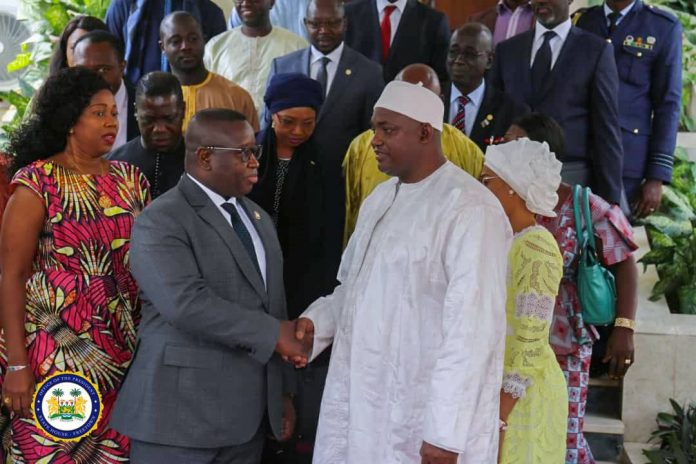 His Excellency President Julius Maada Bio has assured journalists in Banjul, capital of the Republic of The Gambia, that because African leaders are fulfilling their promises he is hopeful of politics in Africa.

He made the statement while he and his host, President Adama Barrow, were addressing a joint press conference as part of his state visit to the West African nation celebrating her fifty-fourth Independence Day this week.

“The dynamics in African politics is gradually changing because leaders are now building powerful institutions that will force them to deliver on their promises of sustainable development. My visit here is to widen, deepen and to further strengthen the relationship that Sierra Leone and The Gambia have enjoyed for a very long time,” he stated.

President Bio also noted that The Gambia was known for her safest destination for tourism and was, therefore, looking at the cultural infrastructure of the country so that he could model some of them to add more value to what the tourism sector in Sierra Leone is offering at the moment.

“My colleague President Barrow and I will be looking at possibilities in areas like fisheries, agriculture, education, trade and industry because the two countries can benefit a lot from these sectors,” he said and urged his counterpart to pay attention to building the future.

He said that Sierra Leone had listened to the recommendations of the Truth and Reconciliation Commission, established in 2002 as a condition of the Lomé Peace Accord in the wake of the 11-year civil war, and hoped that injustice and massive corruption would never trigger any other war again.

“To make my governance very effective, I have instituted the Commissions of Inquiry, not just to hold past government officials to the scrutiny of accountability but to also put officials of my administration on their toes so that all of us will not fail to meet the expectations of those who elected us for change,” he said.

His Excellency President Adama Barrow also told newsmen that during his presidency, The Gambia would be open for new ideas and that was why working with the President of Sierra Leone President, Julius Maada Bio, was timely. He confirmed that the country played a major role in resolving the impasse associated with the last elections in The Gambia.

“It is good we are working together because Africa is now speaking with one voice and for a common goal. The Gambia and Sierra Leone are going to focus on education, trade, tourism and agriculture for the development of the two countries. We have to embrace Sierra Leone because they have accepted democracy, having transferred political power democratically for five times now. We should change our mind-sets and learn from other nations,” he said.

President Adama Barrow further explained that Sierra Leone and the Gambia had witnessed a military regime, war and transfer of power, adding that he was pleased with the visit of his colleague and hoped to continue to compare notes for effective governance.