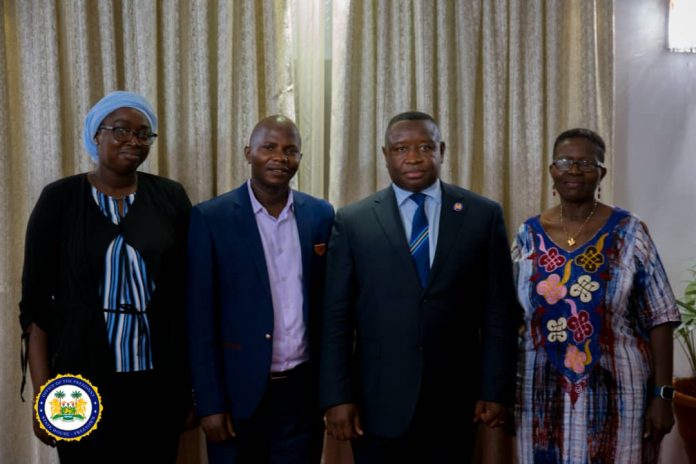 “This is disgraceful, shocking, and callous! It is shameful for us as a nation,” a visibly angry and deeply emotional President Julius Maada Bio has said in reaction to graphic and disturbing details of the nature and numbers of rape and sexual violence cases.

Dr. Gladys Claudius-Cole, a medical doctor who had worked pro bono with the centre since its establishment in 2003, presented a history of the establishment and expansion of the centre around the country, stressing that they were overwhelmed by cases of rape and sexual violence but were also dismayed that the rate of successful prosecution was abysmal.

She furthered that in spite of the anxiety about acquiring a sustainable funding stream to support their work, more interagency collaboration is needed especially with the Ministries of Health and Gender and the Sierra Leone Police’s Family Support Unit (FSU).

The justice sector had also been continually engaged, Dr Cole continued, adding that the trend is worrisome, particularly because of the ages of the victims and perpetrators and the cruelty of violence meted out to the survivors.

“Girls below 10 years and as young as 3 months have been subjected to sexual violence. The perpetrators are also getting younger and there have recently been multiple cases of gang-rapes by children as young as 12,” Dr Cole pointed out.

She concluded that significant deficiencies in existing laws and legal processes meant that fewer than 5 per cent of reported cases countrywide were successfully prosecuted.

Dr Bintu Mansaray, another medical doctor who volunteers at the Rainbow Centre, added that the complexity of cases is daunting, especially as a higher number of rapes and sexual violence had ended in unwanted teenage pregnancies. She recalled that there had also been recent cases of necrophilia and bestiality and more cases of HIV and STD transmissions in addition to rabies after a perpetrator set a dog on a victim.

Dr Mansaray also discussed the issue of safe homes for survivors as there had been multiple cases of survivors being raped again by their perpetrators who were family members. Social responses to and perceptions of sexual violence had resulted in silence, compromise, and outright complicity by families and communities, she said.

She also lamented the worrying trend of video centres, across the country, showing pornographic films to audiences of underage children, emphasising the point earlier made by Dr Cole and calling for forensic facilities. She called for a change in the legal processes so that rape experts, rather than just registered medical professionals, could testify in court in order to increase prosecution rates throughout the country.

Daniel Ketoh, Executive Director of Rainbow Centre, disclosed that the NGO was 100 per cent donor-funded but that was not assured and not sustainable. He added that a recent increase in the number of centres, to five regional headquarter towns had led to increases in the number of reported cases of sexual violence. He also drew attention to the fact that the centre is presently staffed by mainly interns and volunteers and that Government could play a role in enhancing cooperation between the FSU and the Police Medical team.

Responding, President Bio thanked the Rainbow Centre for its selfless but relentless work in treating survivors and providing training for police and the judiciary in order to develop their capacity to deal with sexual violence. He offered that a holistic approach to the issue was more desirable and promised to immediately constitute a taskforce comprising the experts at the Rainbow Center, the judiciary, Police, MDAs, and other stakeholders.

The President announced that he had already directed the Ministry of Social Welfare to comprehensively review the Sexual Offences Act but he also believes that Government could take a lead in a comprehensive plan of action, including part funding, interagency support, the provision of mobile and other forensic labs, and dealing with cultural attitudes towards rape and sexual violence.