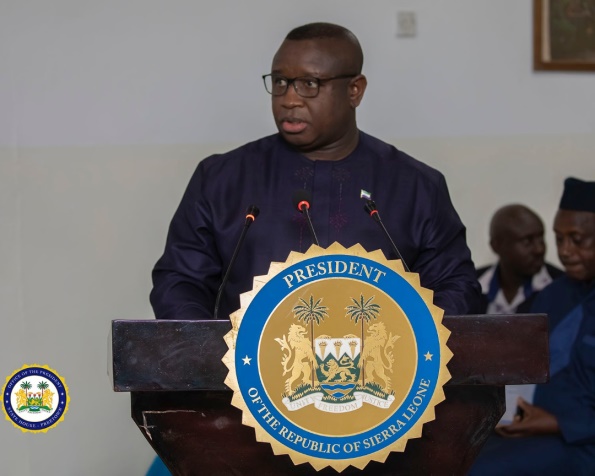 President Julius Maada Bio has on Wednesday 25 March 2020 addressed the closing of the three Commissions of Enquiry (COI) into governance processes, assets and forensic audits of former administration, warning serving officials of his Government not to betray public trust. The event took place at the Special Court Complex in Freetown.

“As I have maintained before, this must be the last Commission of Inquiry in our history. As a nation, we should have learned and applied the singular lesson from these Commissions – that persons who hold the public trust must serve honestly, justly, fairly, and diligently; and that as a country, we must put an end to a culture of rampant thieving, abuse, waste, and impunity. So, these Commissions should serve as a warning and a deterrent to serving officials.

“As the Attorney General and Minister of Justice has stated, the Commissions of Inquiry looked at three key issues: governance processes, assets and forensic audits. The forensic audits tracked fraudulent activities within entire chains of governance. The Commission on Assets examined disparities between income or means and assets. The Commission on Governance processes looked at inefficiencies and deficits in governance especially where people deliberately misused or took advantage of State institutions,” he said.

Talking to the occasion at the Special Court Complex on Jomo Kenyatta Road in Freetown, the President also noted that in spite of partisan wrangling over the legal instrument and the very legitimacy of the COI, the President said he was glad to report that there had been no reports of public humiliations, lynching or even tribal wars as the political prophets of doom had boldly predicted. He added that at the end of the day, nobody was questioned because of their ethnic group or their place of origin.

“I have argued that corruption is a key deterrent to the development of Sierra Leone. The fraudulent conversion of public funds and resources to private use, the waste of public funds with impunity, and the abuse of offices and authority to the detriment of millions of Sierra Leoneans, are all threats to our development as a nation. The machinery of State and its governance institutions have been weakened by corruption and it would seem we have failed to heed the bitter lessons of The Truth and Reconciliation Commission report and the collective shame of our underachievement as a nation,” he said.

Sole Commissioner for Commission No. 1 Justice Biobele Georgewill, who spoke on behalf of the other Commissioners, said that with the highest sense of responsibility they felt fulfilled to present their final report. He said that during the proceedings of the COI, they adopted a robust approach to ensure that they carried out their work in accordance with due process and the rule of law in Sierra Leone.

He further noted that during the process, the State and Persons of Interests were given equal treatment to ensure fairness and impartiality and commended President Bio for giving them the independence to do their work, saying that was unprecedented. He expressed hope that an assiduous implementation of the recommendations of the report would go a long way to change the narrative in public governance in the country.

Attorney General and Minister of Justice, Dr Priscilla Schwartz, said that the COI was not a witch-hunt but a quest for accountability, adding that the process was demonstrative of the strength of the country’s democracy and the beginning of the restoration of the rule of law and equal access to justice. She also commended the Commissioners for showing tremendous courage and professionalism and described them as being outstanding for which the people of Sierra Leone were grateful.