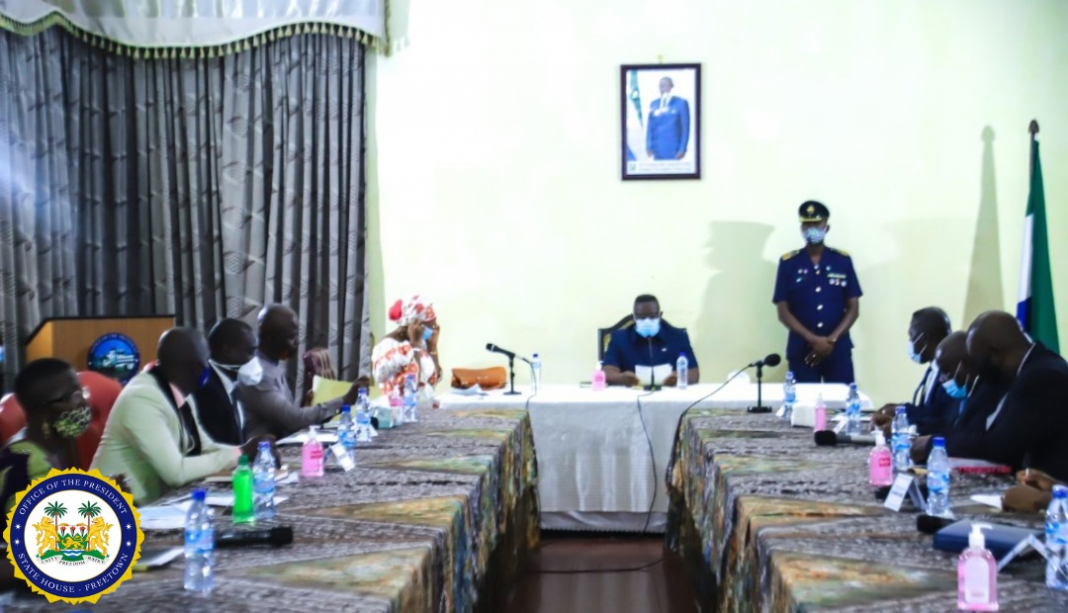 Speaking during a high-level stakeholders’ meeting at State House on Tuesday 14 July 2020, President  Bio  encouraged parents and  community residents to support the Government’s efforts in tackling rape, early marriage and all forms of violence against women and girls in the country.

The President said that it is the responsibility of Government to protect the lives of everyone, adding that such could only be achieved with the involvement of parents and members of the community. He emphasised the need to end all harmful practices that are affecting the growth of women and girls in the country.

The President also used the occasion to commend the Rainbow Initiative for their tenacity in doing a very difficult job and for standing for survivors of rape and sexual violence. He noted that the statistics around rape in the country were grim, adding that it was why he declared a national emergency on rape and sexual violence in February 2019.

“Rape is unacceptable because it is about the future of our children. The parents and communities need to stand up because it is better to work towards prevention. Parents should be attentive to raising our children. There is a need for a multi-sectoral approach and coordination to get rid of impunity,” he said.

First Lady, Her Excellency Fatima Maada Bio, said that they were meeting to brief the President on the task given to them regarding the “Hands Off Our Girls”, (HOOG) campaign and how they could find solutions in dealing with rape, teenage pregnancy and early marriage in the country.

She noted that they had gone right across the country to engage relevant stakeholders and to raise awareness about the dangers of rape and sexual violence against women and girls. She also said that since the launch of the HOOG, they had achieved a lot, but would still need the cooperation of everyone if they are to achieve their goal.

Executive Director of Rainbow Initiative, Daniel Kettor, said that there has been a lack of support from the community to survivors, saying that such is affecting the fight against rape. He recommended for the acceleration of the functionality of the One-Stop Centers, to assign medical staff to those centers and to establish more safe homes across the country that would minimise the rate at which society and parents compromise on rape matters.