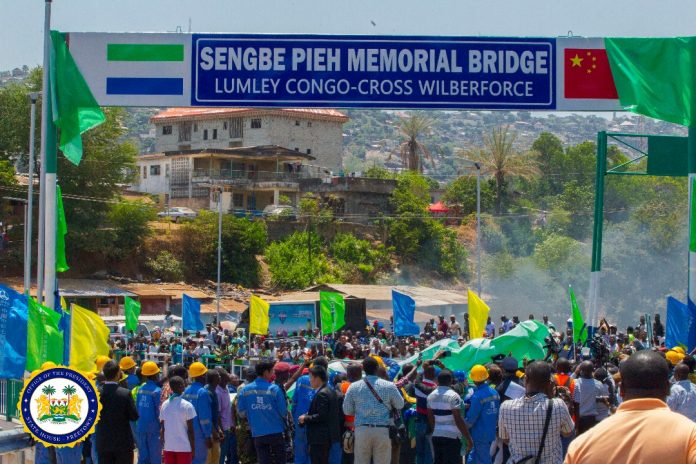 The 1.8 meters bridge was built in five months for less than $2.4 million with support from the Governments of the People’s Republic of China and Sierra Leone.

In his keynote address, President Bio said that unlike so-called infrastructural projects in the last eleven years, where government officials would cut corners in order to steal, the bridge was built to budget and in accordance with international standards and it abutted the existing two-lane bridge, therefore providing a total of four traffic lanes.

“This now shows we can do infrastructural developments that employ our own people, local Sierra Leoneans, as part of the workforce that builds our roads and bridges. The locals will be thus both financially empowered and gain valuable work skills and experiences.

“The New Direction is delivering on what it promised, to develop infrastructure in this country. My Government maintains a long term and holistic approach to infrastructural development. So in addition to the bridge, my government deems it necessary to build a bigger and more conveniently-located market and a transportation interchange for minibuses, taxis, and other commercial vehicles,” he said.

President Bio mentioned that the bridge and infrastructure would unlock the tremendous economic potentials in tourism, fisheries, and other sectors associated with that part of the city. He said it would also relieve traffic congestion, make urban commuting and access to markets, public facilities, offices, schools, hospitals easier, faster and safer, adding that these developments were also for air quality, respiratory health, and general sanitation and public health.

He also commended the partnership and generosity of the People’s Republic of China and acknowledged, with much gratitude, the continued generous support of the Government and people of the People’s Republic of China, noting that the years of friendly relations between the two countries had consistently provided technical assistance and capacity building for various sectors, improved public health and healthcare institutions, enhanced livelihood, helped modernise agriculture, and developed infrastructure in the county.

Chairman, Presidential Initiative on Infrastructure, Dr. John Edward Tambi said the new Direction Government believed in putting the welfare of the nation first, irrespective of region and political orientation. He said his office was rebranding and bringing transformative infrastructural projects to the country and that the bridge was a manifestation of that commitment.

Chinese Ambassador to Sierra Leone, Hu Zhangliang, said the project was an important decision taken by the Government of Sierra Leone to reduce the traffic and improve the lives of the people of Sierra Leone, adding that the bridge could be described as one of the successes of the relationship between Sierra Leone and the People’s Republic of China.