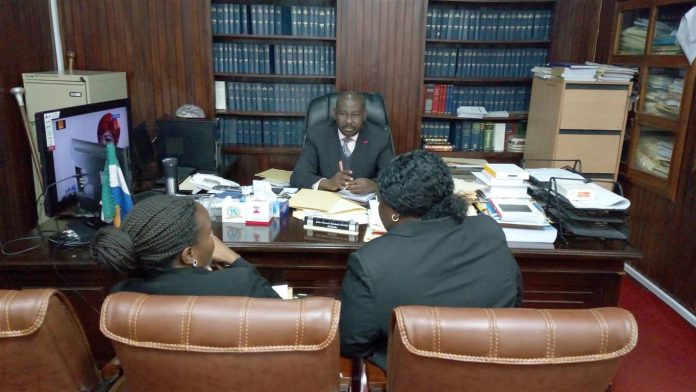 The Chief Justice of the Republic of Sierra Leone, Justice Desmond Babatunde Edwards has agreed to meet with the Legal Aid Board on a weekly basis to look at challenges facing the Board in the courts. This came about following a meeting with the Executive Director of the Board, Ms. Fatmata Claire Carlton-Hanciles and two other staff of the Board in which both discussed wide ranging issues.
Ms. Carlton-Hanciles drew attention to the recent transfer of judges and the effect this will have on the cases they are presiding. ‘Some of the judges have been transferred outside the jurisdiction of Freetown at the tail end of the trial of our clients,’ she said. The Chief Justice assured the Legal Aid Board Team that the Judges will not abandon any of the cases they have been hearing. ‘We will ensure they complete their cases within three months,’ he said, adding ‘If it means providing transportation for the Judges to come over to Freetown to complete their cases, we will do so.’
Ms. Carlton-Hanciles also expressed concerned over members of the Bench she referred to as prosecutorial Judges. She said these Judges keep adjourning cases because the prosecution does not have the witnesses to testify, while at the same time keeping the accused on remand for long periods sometimes for three years or more.
The Chief Justice stressed that this will not continue under his watch. He noted that when he was confronted with such situations, he will put the accused on bail and then discharge the matter after some months of adjournments.
Ms. Carlton-Hanciles expressed concern over the prolong delay in trial for capital offences because there are no jurors. ‘There are cases which have not been heard since the start of the year,’ she said. The Chief Justice promised to convene a meeting with the Chief Immigration Officer, Head of the Human Resource Management Office (HRMO) and District Officers upcountry to chart a way forward.
The Legal Aid Manager, Ms. Cecilia Tucker informed the Chief Justice that all 44 matters involving over sentencing have been heard on summary review presided over by Justice Alusine Sesay JSC and Justice Monfred Sesay JA.
She also drew attention to the recent increase in the number of courts in the division hearing sexual offence cases and wanted to know what would happen to cases being heard by judges who have been allocated to other divisions. The Chief Justice said he intend to revive the Saturday Courts for sexual offences.
Ms. Carlton-Hanciles appealed to the Chief Justice for a Special Criminal Sessions of the High Court in Port Loko and Moyamba Districts. The Chief Justice said this is something he is thinking about. Ms. Carlton-Hanciles also appealed for a resident judge for the two districts.