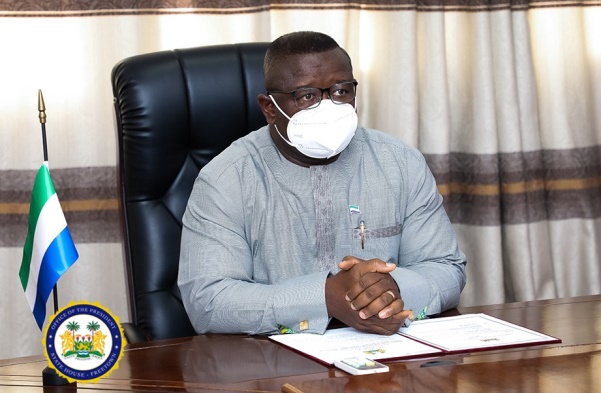 President Bio, on the 22nd May 2020,  held a virtual meeting at State House with development partners in Sierra Leone as part of his continued engagements with critical stakeholders in the Coronavirus (COVID-19) pandemic response.

President Bio, in his presentation, expressed gratitude to development partners for their support to the country’s response to the COVID-19, saying that the virus is a global threat they must fight together.

He further expressed appreciation for the continuous engagements of the partners in the fight against the virus, noting that his Government would continue to value their thoughts, recommendations and support.

“As a small nation, we are very proactive. Before the virus landed on our shores, we had put in place quite a lot of arrangements to fight it. It is here now, so we want to slow its spread and stop the transmission as soon as possible. This is why we appreciate our development partners for generously helping us through different means,” the President stated.

Country Manager for World Bank, Gayle Martin, thanked President Bio for convening the dialogue forum. She also commended Government for the intervention by the Anti-Corruption Commission in the Social Safety Net programme, adding that the credibility of any safety net depended on people’s ability to trust that resources were being used for their intended purposes.

Country Representative of USAID, Miriam Lutz, thanked the President for the continued opportunity to dialogue and commended Government’s efforts on the National Malaria Bed Net Distribution, saying that that would help to save many lives. She added that their goal is to continue to help meet emergency response needs and longer-term support to the health system and livelihoods. She also commended the Government for the inclusion of international non-governmental organisations in the COVID-19 response.

British High Commissioner to Sierra Leone, Simon Mustard, said that they were impressed with the Government’s continued engagements with partners to discuss the various aspects of the response. He expressed hope that the collaboration would continue in the coming months. He also appreciated the Emergency Operations Center (EOC) for giving daily updates and press conferences, saying that that had also been helpful.