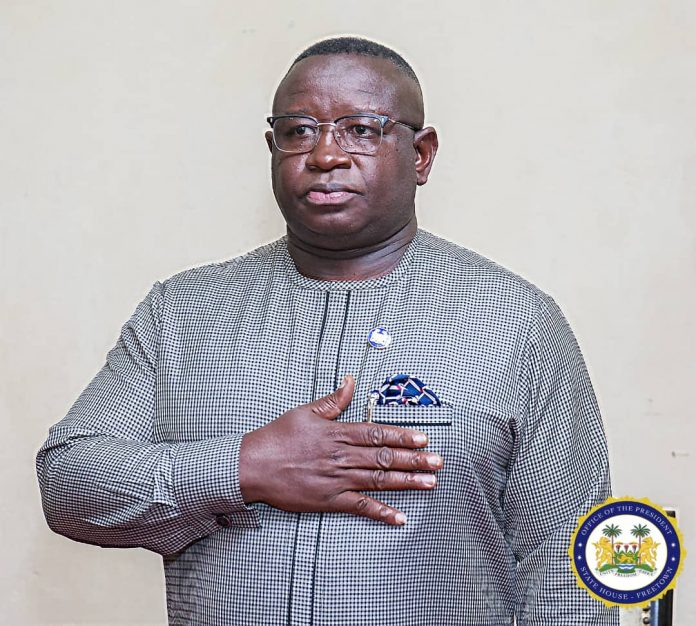 Sierra Leone embarked on a new development trajectory on Thursday February 28th 2019 at the Bintumani Conference Hall in Aberdeen.
The auspicious moment which was chaired by Vice President Dr Mohamed Juldeh Jalloh saw the launching of Sierra Leone’s new medium term National Development Plan.
The event attracted a cross section of distinguished and ordinary Sierra Leoneans including the Freetown City Mayor, traditional leaders, members of government, the public and students to witness the launching which has the theme: ‘Education for Development’.
Speaker after speaker congratulated the Minister of Economic Development and her team for their concerted effort in making the formulation of the NDP an all-embracive endeavor that incorporated all levels, regions and opinions of the country.
Summarized, the outlook of the NDP is to change Sierra Leone’s dismal narrative from underdevelopment to development encompassing eight key areas, but mainly human resource to facilitate dynamic scientific, technological, cultural, agricultural, industrial, economic development.
Presenting the NDP, which the Economic Planning and Development Minister, Nabila Tunis, called the People’s Plan, she said it is intended to transform Sierra Leone.
The participatory process which brought out the final document was launched in May 2018 and took in 2 million people including parliamentarians, political parties, civil society and lots of grassroots, men, women and youth organizations.
Its focus among other things is on inclusive rural economic development; infrastructure and economic development with sub clusters; governance and accountability for results; political inclusion for national development including the fight against corruption, promotion of human rights, public financial management; empowering women and persons with disabilities; youth employment and national environmental resilience.
To achieve the NDP, she said we need to journey together – collaborate, partner, work together.
Implementation she said will be based upon a well-defined and established monitoring and evaluation structure with a result framework, and the accompanying strategies for achieving the results in line with the SDGs and the AU Development Agenda.
The cost of implementing the plan over the next five years she said will cost US$8.1 billion, with the government providing US$6.8 billion; with us the citizens looked up to, to provide US$ each to fill in the shortfall funding.
Keynote speaker, His Excellency President Bio, reminded the audience of his policy statements to Parliament highlighting perceived development deficiencies and the need for a comprehensive blueprint for moving the country forward and that such a plan should be owned by us by being inclusive, consultative and domesticated result oriented NDP.
He applauded the Development Ministry for articulating the people centered plan which was funded by the Government, guided by the principle of leaving no voice behind including the Diaspora.
He outlined the factors that suffocate development and his Government’s solution to the rut that they inherited from the former that includes a culture of accountability, disciplined leadership, political will and commitment.
With tenacity and hard work, President Bio said as a nation we can achieve the NDP which will span over a 20 years period.
He called on donors to harmonize their assistance with the NDP to avoid duplication and wastage of resources – The end result of which will be wealth and job creation, especially for the youth.
After the launching of the Plan by His Excellency, the vote of thanks was given by a representative of the Sierra Leone Chamber of Commerce, Industry and Agriculture who promised that the private sector will work closely with the Government towards implementation of the NDP.