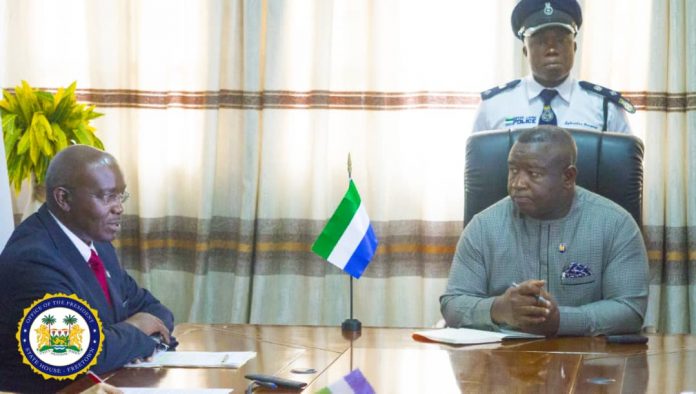 Sierra Leone’s Minister of Finance, Jacob Jusu Saffa, who chaired the meeting, said he was very encouraged by the interactions between the World Bank and the Ministry of Finance. He said the visit was a manifestation that the Bank was an important partner to the Government of Sierra Leone.

In his statement, Mr. Kerali said his visit to the country was a follow up on the discussions between President Bio and the World Bank regarding the Western Area Power Project that the Bank had cancelled before the elections. He also spoke the Bank’s potential support to the energy sector.

He also spoke on the Country Partnership Framework, the Bank’s strategy for Sierra Leone, adding that they wanted to make sure that their agenda could be aligned with Sierra Leone’s National Development Plan. He confirmed that the Bank would be increasing its support to the country, both in the form of soft loans and grants.

“His Excellency Sir, we will talk about the Human Capital Development which we know is very close to your hearth, the free quality education programme that you have introduced and also the healthcare projects. We believe we can support the Government with the rural roads and bridges project and we can proceed with some discussions on the business environment and how we can support that as well,” he said.

On his part, President Bio said he was happy to receive the visiting team once again into the country, adding that all the areas highlighted by the World Bank were of concern to his Government. He expressed frustration about the cancellation of the energy project but maintained that Government would look at the Country Partnership Framework to see how that could be restructured.

He assured that his Government would continue to encourage partners in the Human Capital Development as the flagship programme of the Government, adding that that was the only foundation to achieving the Sustainable Development Goals and providing the opportunity for the country to start on the right footing.

“We are excited to hear more about the rural roads and bridges project and definitely the business climate is something we have to work on. As a Government, we want to make sure we create the right type of climate to attract the right investors. We are very excited about our partnership and we want to do everything possible to broaden our areas of cooperation and strengthen this relationship so that we can actually deliver the progress which we promised this nation,” he said.