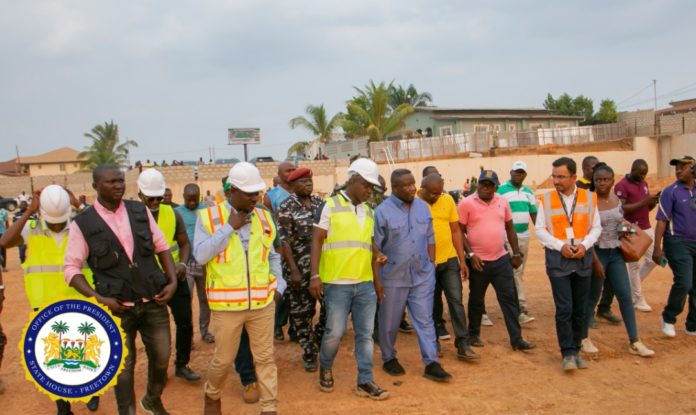 President Dr Julius Maada Bio has on the 14th April 2022 inspected the construction of the Mattru and the Gbaiima Roads, the Bo Bus Station, the Ngieya and Hancils Roads and commended ongoing efforts by football administrator and philanthropist, Babadi Kamara, to construct a 6000-capacity Southern Arena Stadium.

During the tour of ongoing works, the President commended the Bo City Council and the people for their continued role in supervising all projects, adding that they deserved more than what they had as development in the city. He further noted that his Government is working tirelessly not only to upgrade the city of Bo, but to also upgrade all cities and towns in the country.

At the construction site of the Southern Area Stadium, Babadi Kamara, who is also Team Manager of Leones Stars, the national team, and Chairman of Bo Rangers Football Club said the motive behind the construction of the stadium is “to contribute to societal development, develop new players and improve on existing young football stars in the country and to explore their potentials”.

He added that development should not only be left in the hands of the central Government and urged individual businesses and private sector players to complement efforts by the Government in nation-building.

“Once completed in the next 6 months, the stadium will conveniently hold 6000 spectators with facilities like in any modern professional stadium in the world. I, therefore, want to encourage other private sector players. That’s the only way we can see rapid changes and development in the country. This is a 100% football complex, no other sporting activities will be allowed in the stadium,” he assured.