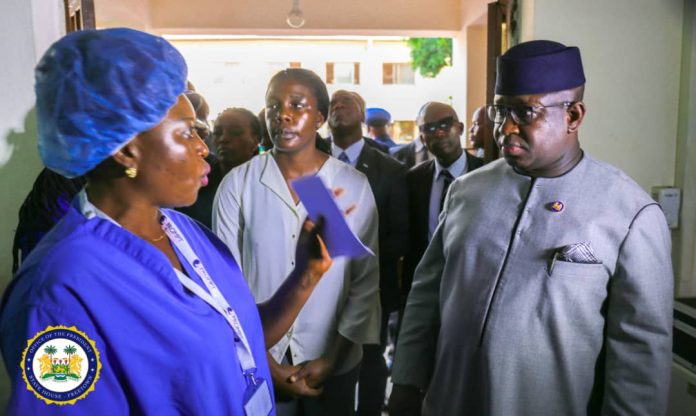 In was disclosed that His Excellency President Julius Maada Bio paid a visit to the five-year-old rape victim who has been crippled and hospitalised at the Aberdeen Women’s Centre at Aberdeen in Freetown.

During the visit, the President said that after declaring a State of Emergency on Rape and Sexual Violence, he decided to get a first-hand experience with the extent to which the menace had cut deep into society by visiting the centre.

He said what he had seen was completely flabbergasting with a young baby, 5, who had been violated and destroyed by an elderly person, adding that that was the reason he had decided to declare to call for stiffer punitive measures to curtail what was fast becoming a culture albeit unacceptable.

He also mentioned his moral obligation as a leader to protect every Sierra Leonean, saying that even though his declaration had been politicised he was with a clear conscience, as the Head of State, to protect his citizens, especially those who could not talk for themselves but needed to be protected. He emphasised that as a guardian he would make sure that they were protected.

“I also want to use this opportunity to recognise the work of so many women at this centre who are giving up their time and providing service to several people who have been victims of rape and other forms of sexual assaults. I hope we will get the support we need from the country to be able to stop this madness and also be able to provide support to those who are victims already and those who are taking care of them.

“We are putting in place a lot of processes to be able to help those who are taking care of these women and the forensic lab is one of those facilities. We need to be able to establish that indeed rape did occur and a particular person was responsible. We are concerned about the welfare of all of these women, especially those who have been violated and we have to make sure that we have the provisions to take care of them,” he assured.

Non-Clinical Director of the Aberdeen Women’s Centre, Ivy Kalama, said they were excited about the President’s visit and also thanked the Ministry of Health and Sanitation for their support to the centre in terms of personnel. She also said that the institution was challenged with water facility and the provision of adequate drugs and medical supplies and, therefore, called for supplementary support from the Government.

It could be recalled that earlier this month, President Bio officially declared a National Emergency on Rape and Sexual Violence, as a step geared towards addressing rape and all forms of sexual violence in the country which had been approved by the House of Parliament.