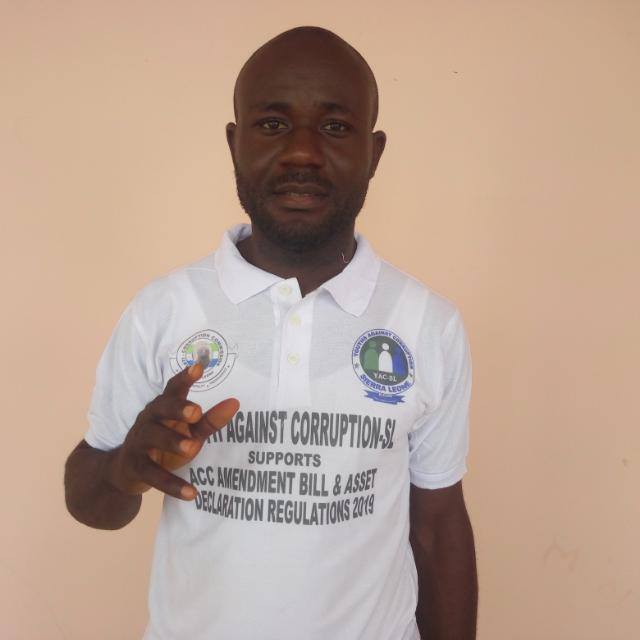 One of the pressure groups operating within the country, Youth Against Corruption Sierra Leone (YAC-S) with its motto Honesty Integrity and Transparency during a Press Conference convened on the 25th February 2019 at the Ministry of Youth Conference Hall strongly pledged its support for the Anti-Corruption Amendment Act 2019 for A Zero Tolerance on Corruption in Sierra Leone. Present among those who were in attendance were Public Relations Officer of the ACC, Margaret Murray, Deputy Commissioner of the National Youth Commission, Emerson Kamara, Hon. Sallieu Mustapha, MP for Constituency 195 in Moyamba, representatives from civil societies, various youth groups and the press. The Deputy Minister of Youth Affairs, Lusine Kallon served in the capacity as the Guest Speaker.

Speaking during the meeting, the Deputy Minister of Youth Affairs, Luseni Kallon told his audience that public officials and their private sector collaborators involve in corruption can be described as “mass murderers”. He stressed that they are killing millions of people through their unpatriotic and evil practice. Their activities have stifled growth in various sectors, adding that monies meant for drugs, roads, hospitals, schools and public security were siphoned/stolen away, thereby depriving citizens of these amenities.
He praised the youths for this campaign, which he said will raise the awareness among their peers and other Sierra Leoneans about the dangers of corruption and moves made by the Government to fight it. He further observed that the appointment of an erudite personality like Francis Ben Kaifala Esq. as the new ACC boss. This move, he said, further buttresses the point that the future of the country lies in the hands of youths. He appreciated the patronage of the meeting by so many youths and encouraged them to be steadfast in the fight against corruption.
The Youth Affairs Deputy Minister called on all the youths of this country to take the lead in the fight against corruption underscoring how the youths are the key agents for social change, key agents for economic growth, key agents for sustainable development . He furthered that Sierra Leone is in the hands of the youth and they must step forward and contribute meaningfully towards national development. Kallon noted that what they do today reflect on the society tomorrow.

The Executive Director of the organization, Sheku Koroma (Miracle Seer) , maintained that YAC- SL was formed due to citizens’ concern about the rising levels of corrupt practices in the country.
He intimated how the organization is a youth-based entity founded and steered by a group of youth activists across Sierra Leone who believe that the fight against corruption is everyone’s responsibility i.e. both old and young.
“Everyone’s contribution is critical however small it might seem. These youth have pledged zero tolerance to corruption to their country and influence their peers to follow suit,” he highlighted.
According to him YAC -SL seeks to promote the culture of integrity, transparency, accountability and prevention of corruption and its consequences.
The organization founders, he furthered, strongly believe that the youth’s engagement in this Anti-corruption fight will make the dream of a “corruption-free” a generational reality.
“This will further increase the youth involvement in defining solutions to various problems our societies are facing; something vital for continued development of the societies in which we all live,” he averred.
Youth Against Corruption is a Civil Society Organization that operates as a partner with the Anti-Corruption Commission to fight against any form or act of corruption within the length and breadth of Sierra Leone. On that premise, the organisation wants to champion and establish the need why the Anti-Corruption Commission on it Amendment Act 2019 Bill must be supported, it was pointed out.
During the Press engagement he highlighted that the new amendment bill will enhance and strengthen the Anti-Corruption Commission to fully undertake it prerequisite reason for existence in the fight against corruption. The new proposed Bill is scheduled to be debated in the Well of parliament on today, the 27th February 2019.
The proposed Bill makes provisions to look at the pit-holes within the current Act of 2008 in terms of: convicted person (s) to pay lesser fines compared to the offence committed, lesser jail terms for convicted person (s), protection of Anti-Corruption Commission witnesses from accused person (s) taking action against them in the court of law, increase of fine and jail term for impersonation of Anti-Corruption Commission officials.
The organization stated that the fight against corruption is all and sundry regardless of different political backgrounds, tribes or different part of the regions people are coming from.
“We must, as a country, join the fight against corruption and help eradicate corruption from our country,” he enjoined
Speaking on behalf of the ACC boss, Madam Margret Murray, Public Relations Officer of the Commission, disclosed that an amendment to the ACC Act of 2008 has been prepared and sent to Parliament for approval. She further disclosed that the bill will replace several sections and phrase in that Act. Section dealing with penalty of convicted persons, which laid a jail term of 3years, will now be 5 years and the court will now be empowered to order the convict to pay back the full amount misappropriated. The old fine of Le3 million will now be Le30 million. Furthermore the commission will have the right to engage in out of court settlement with any such persons, as part of his other options, including prosecution and all such payments be made into the CRF. Further elaboration was done by one of her staff, Morris Ibrahim Kanteh.
In his own statement, MP for Moyamba, constituency 195, Hon. Sallieu Mustapha said that corruption is a worm that is eating the very fabric of society and he was happy that the youths have come on board in this fight. He went on to say that unexplained wealth is an act of corruption and that is the reason why public officials are required to declare their assets when they come into office and when they leave. This will ensure that proper accountability is given for their stewardship. He gave example of the use of billions of Leones without documentation by officials in the ministry of Social Welfare Gender and Children’s Affairs during the Ebola crisis. Monies meant for survivors and their families. This, he maintained was revealed by the Audit Report of 2017 page 195 on that ministry.
Hon Mustapha emphasised that since the government of President Bio came into power, it has not received a single cent from the international community and that it has been using the revenue it has generated from within, adding that the government is now trying to source fund from its partners. He stressed that the EU does not have the conditionalities of the IMF, but looks at the country’s ability to generate internal revenue for consideration of any help. He further disclosed that he has filled his own asset declaration form and ready to be submitted to the ACC. He stressed that with the various oversight role of the Parliament, if that institution could put aside partisan politics; it will be able to deal with corruption and may in fact render the ACC redundant. Parliament, he added should be serious about fighting corruption. He praised President Bio for declaring war against corruption and he is optimistic that the fight will be won if the youths put their shoulder to the wheel and disseminate the news about corruption.
Other speakers gave similar statement buttressing the need for an amendment and collaboration of the entire country in this fight. A question and answer session climaxed the event.