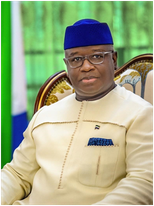 He emerged winner in the overall category –African of the Year, with the poll attracting a combined total vote of over 15,000 and over 1 million active online engagements during the voting period, as at the close of the poll on Friday, December 02, 2022, at midnight Central African Time.

The poll, which has become the continent’s premium vote-based awards, attracted over 12,000 votes on the African Leadership Magazine website and over 3000 votes via email.

Winners for the 11th edition of the award shall be presented with the honour instruments on February 16th, 2022, during the annual African Leadership Magazine Persons of the Year Award ceremony, billed to hold in Port Louis, Mauritius.

President Bio won a popular vote and came to power in 2018 on the promise of prioritizing Human Capital Development and providing free and quality education to the citizens of Sierra Leone.  Four and half years on, he has sustained his commitment amidst economic shocks occasioned by the COVID-19 pandemic and the ongoing war between Russia and Ukraine.

Recent data by the UNESCO Institute for Statistics put the country’s total Government expenditure on education at 32% of the GDP – making it one of the highest in the world. His Government’s massive investment in health, agriculture, mining and infrastructure development also contributes towards reshaping the country’s socioeconomic development trajectory.

In describing the nominees for the 11th Edition of the coveted prize, the Chairman, Dr Ken Giami, noted that:“Our nominees see progress, where others see retrogression; they see possibilities amid challenges. They are on a mission and are eager to lead Africa to the Promised Land,” he said.

The African Leadership Magazine Persons of the Year Awards is Africa’s premier vote-based endorsement, reserved annually for the leading Africans who contribute to promoting the continent’s progress and positively altering Africa’s perceived negative image. The annual event has also become a platform for honouring people-centred leadership and Africans pursuing a pan-African agenda in their chosen fields. This year’s event will provide a platform to celebrate the continent’s merchants of hope, ready to lead an army of change agents and reformers, to build an Africa that works for everyone.

Other winners in the different categories include: Dr. Ngozi Okonjo-Iweala, Director General World Trade Organization – African Female Leader of the Year; His Excellency Hakainde Hichilema, President of Zambia – African Political Leader of the Year; Dr Patrice Motsepe, Founder and Executive Chairman of African Rainbow Minerals – African Industrialist of the Year; amongst others.