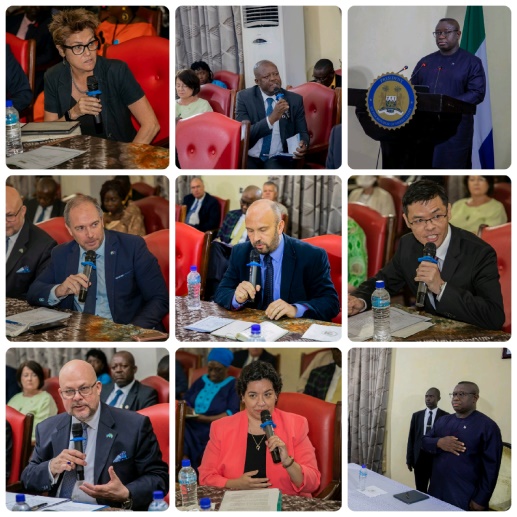 On Wednesday 25 March 2020 at State House President Bio engaged development partners and members of the diplomatic and consular corps on Government’s recent enhanced preparedness for the coronavirus disease in Sierra Leone.

“We have declared a State of Public Emergency to facilitate a more agile but robust response to a rapidly changing situation in the sub-region. Let me assure you that our actions during the period of the emergency will be non-discriminatory, proportionate and undertaken only if necessary. This is not a lockdown. But we will consider further measures based on developments in our neighbouring countries and in our country,” he said.

President Bio said the Government anticipated a disproportionate economic impact, adding that they intend to remain disciplined and focused on their agenda of fiscal discipline, public financial management and their overarching fight against corruption.

He said he had set broad achievable goals that include supporting the private sector and local entrepreneurship, maintaining a stable foreign exchange rate and stable prices for key commodities, expanding the social safety net to cushion the impact of the anticipated contraction of the economy and supporting labor-based public works, plus assistance for the local production and processing of staple food items.

“In view of the situation, Government is seeking augmentation of our current allocation under the Extended Credit Facility Programme with the International Monetary Fund. Additionally, we are also seeking three key interventions: Debt relief from the IMF under the Containment Window of the Catastrophe Containment and Relief Trust; debt relief from other Bilateral Partners and Multilateral Agencies; and additional grant resources from other Development Partners,” he said.

Minister of Planning and Economic Development, Dr Francis Kaikai, said that the key development partners were meeting on the request of the President as part of the Government’s engagement with critical stakeholders on its Coronavirus preparedness efforts.

United Nations Resident Coordinator to Sierra Leone, Sunil Saigal, thanked the President for convening the meeting, saying that it was timely to engage. He also commended the Government for being so proactive in its preparedness and its prevention efforts by building on the experience from the Ebola outbreak of 2014-2015.

He noted that coordination would be very crucial and added that he was satisfied with the structures that had been laid out. He also said that they were pleased to be able to help so far, especially with the health authorities to support the preparedness and prevention while assuring that they were ready to stand with and support the Government.