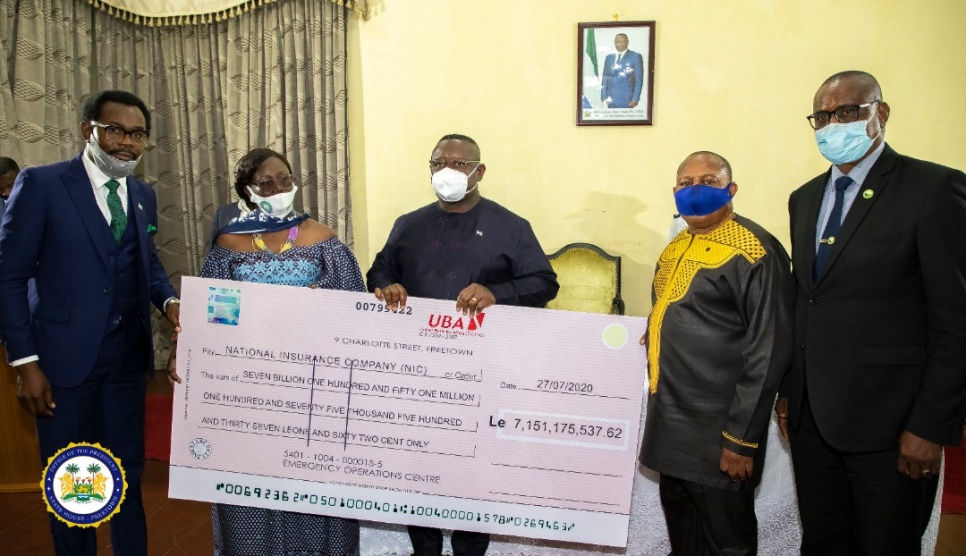 At State House on Tuesday 28 July 2020 President Julius Maada Bio has said that over the past one week his Government has done Sierra Leone proud with a hat-trick of momentous firsts while launching insurance scheme for health workers.

“After 55 years, we stood up as a nation and expunged criminal and seditious libel laws. Free speech and good governance go hand-in-hand… We revamped the Sexual Offences Act, established the first-ever One Stop Centres and now, we have set up Sexual Offences Model Courts to fast-track justice for survivors…and so today, as we take this next momentous step, let us be reminded that when the Ebola Virus Disease struck in 2014, hundreds of our health workers paid the ultimate price,” he said.

He, therefore, noted that the pain of the 2014 tragedy, for survivors of health workers lost to Ebola and the nation, was made even more excruciating because those survivors did not receive appropriate compensation for the loss of their loved ones.

“My Government salutes the selfless heroism of the departed health workers and profoundly thank them and their families for their service to our nation. Beyond just words of remembrance for their great service to this nation, our firm commitment is to ensure that in spite of resource constraints, we will, henceforth, fulfill our national obligation to every health worker who puts his or her life in great danger to serve fellow Sierra Leoneans,” he assured.

The President stated that his Government was following up on their campaign promise to the women and girls and to do more about sexual and gender-based violence in this country, adding that even in the midst of the raging COVID-19 global pandemic, they had practiced disciplined financial management, provided for the most vulnerable citizens with social safety programmes, and had also just passed a supplementary budget that was focused on saving lives and enhancing livelihoods.

“We have placed the inclusive safety, security, and development of every citizen at the centre of our nation’s development aspirations. Sierra Leoneans, individually and collectively, have a history of making our nation proud.

“We argued in the New Direction manifesto that without ‘a well-resourced and functioning national healthcare delivery system, the country will continue to face depressing socio-development indicators and limited economic growth As a nation, we have no option but to change poor health services and poor health outcomes,” he recalled.

Managing Director, National Insurance Company, Abdul Kargbo, thanked the Government for the trust and confidence reposed in them to provide the first-ever Group Life Insurance Scheme for frontline health workers who were engaged in the fight against the deadly COVID-19, adding that the window of opportunity opened by the Government, reflected its commitment to build a skilled human resources base in Sierra Leone.

Chief Medical Officer, Rev. Dr. Thomas Samba, said that since his assumption of office President Bio had repeatedly demonstrated his love and compassion for healthcare workers. He noted that the launch of the scheme was meaningful and would restore a renewed hope to energise and motivate health workers across the country, adding that the Government was committed to changing the narrative of the health sector.

President of the Sierra Leone Medical and Dental Association, Dr Delwin M. Findlay, said that the launch of the insurance scheme, which covered everything around their work, signified a notable day in the history of the country, especially for healthcare workers. He also thanked President Bio for being a motto in the realisation of the scheme.

President Bio used the occasion to present a cheque to beneficiaries of healthcare workers who had so far died of COVID-19 since March of this year and another cheque of over seven billion to the National Insurance Company to cover for all eleven thousand health workers in the country up to 2021.