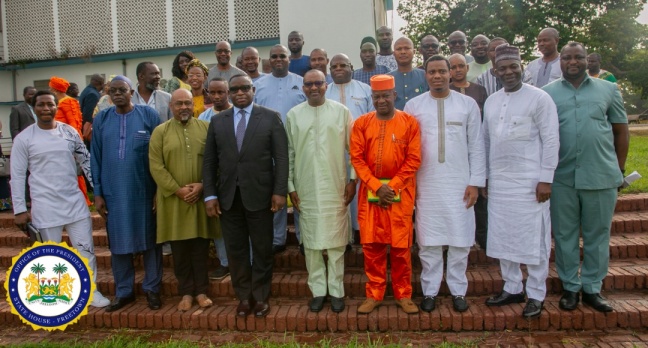 President Julius Maada Bio has on the 1st April, 2022 engaged key stakeholders in the business community and other private sector players and assured them of an inclusive business policy that will see growth in their different sectors.

Minister of Trade, Dr Edward Hinga Sandy, welcomed participants and said they had conveyed a roundtable discussion between the President and all players in the country’s business community, who were contributing immensely to economic growth. He added that when the Coronavirus pandemic broke out, the Government initiated a lot of support systems to support the business community and augment their operations at a time when businesses the world over were almost collapsing.

The Minister further noted that President Julius Maada Bio’s initiative to create the Munafa Credit Facility, the Direct Cash Transfer to market women and support to the hospitality industry were timely interventions to manage the domestic effects of global shocks. He added that it was also a commitment by the Government to continue to support the business community during difficult times.

“This is a big opportunity for all of us to share ideas and challenges together and acknowledge the many supports that the Government has given to the business community. It is also for the Government to clearly understand your collective difficulties. I thank you for coming and I assure you all that this interaction will be productive,” Dr Sandy concluded.

Speaking on behalf of participants, Secretary-General of Sierra Leone Importers’ Association and CEO of Razpec Holdings & Procurement Centre (SL) Ltd, Rashid Conteh, said as a group they were the largest taxpayers in the country, contributing a significant proportion to Government revenue.

“Without a vibrant and functional private sector, economic development will be slow and the much-needed revenue required by Government to support flagship programmes will suffer and unemployment will remain stubbornly high,” he said.

He specifically thanked the President for his policy directions in such areas as the reduction of duty on essential commodities like rice, flour, cement and iron rods, lifting of the burden off importers and helping to cushion household disposable income.

“The disbursement of $50 million as a revolving fund by the Central Bank of Sierra Leone with single-digit interest rate for the importation of essential commodities at the peak of COVID- 19 was commendable and successful in sustaining food and commodity availability in Sierra Leone.

“The trade reforms, rolled out in the last 24 months in areas such as the ECOWAS Liberalization Schemes, Simplified Trade Policies and business-friendly industry policies have not only helped proactive local businesses position themselves to take advantage of the African Continental Free Trade Area of 1.2 billion people, but they will also enhance our competitiveness to trade effectively within the continent,” he said.

He, however, drew the attention of the President to the scarcity of foreign currency in the local banks and instability of the foreign exchange rate, high taxes on trade and pleaded for reduction charges in the GST threshold from $50,000 to $ 8,600, adding that charges by various clearing actors at the port were still many.

While addressing the high-level stakeholders meeting, the President thanked the business community for their support to the economy, saying that no country could develop without their citizens paying taxes. He, therefore, urged citizens to comply with the National Revenue Authority in tax mobilization for sustained economic growth. He noted that there had been some reduction in taxes on many essential commodities in the country; some were the lowest in the region.

President Bio further reminded the high-level stakeholders’ meeting that the world is going through difficulties ranging from the devastating effects of the Coronavirus pandemic that is largely affecting every sphere of life, to the war between Russia and Ukraine.

“The Russian-Ukraine war is having untold consequences in every African country and in Europe. Prices of fuel, electricity, food, and essential commodities are up in every country. Sierra Leone and no Government have control over it,” he noted.

He added that his Government had given different supports to the business sector, which included but not limited to SMEs having access to finance through the MUNAFA Fund benefiting over five thousand businesses, the Quick Action Economic Recovery Programme of Le500 Billion to importers of food commodities to ensure stability in prices, cash support for vulnerable populations and persons in the hospitality and other industries that were hard hit by COVID-19.

He noted that there were no taxes on the importation of rice in the country, and urged citizens to focus on agriculture, which would reduce the burden of relying on foreign rice. He assured that his Government had also deepened bilateral relations with Vietnam and some of their investors would soon arrive in the country to share their expertise in rice production with the Ministry of Agriculture.

“I have always been looking for this opportunity to engage you all on a regular basis. It is better late than never. We will continue this dialogue because it is good for the progress of the country. Thank you very much for coming,” he concluded. 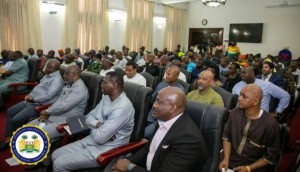