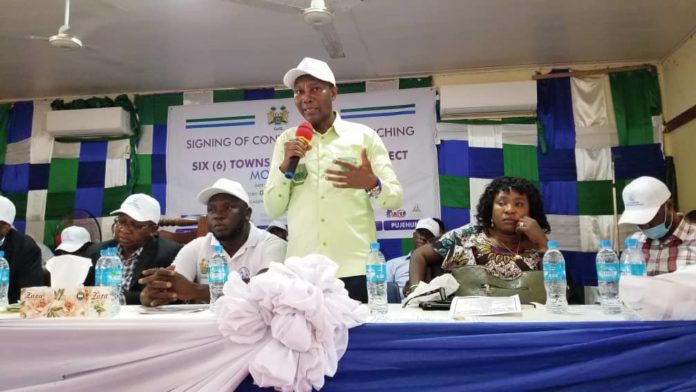 The project is deemed as the biggest water project ever funded by the Government of Sierra Leone under President Julius Maada Bi and was launched at the Moyamba District Council hall during a colourful ceremony.

Welcoming participants at the launching, Paramount Chief, PC Momoh Gulama, expressed his profound gratitude and joy over the Project. He said since President Julius Maada Bio was elected the district continues to witness development.

“This District has been without pipe borne water for the last forty years, so this is a dream come true,” he said.

PC Momoh assured SALWACO and the Ministry that they will continue to monitor the project to its logical conclusion.

Giving the overview of the Project, the Managing Director of SALWACO dilated on the procurement process which started last year.

He said only Kabala, Kambia and Magburaka were successful and it is prudent that the project is launched after the completion of the Procurement process for all the other lots.

Ing. Vandi noted that the project will target 100% customers and before the completion, connection of pipe networks would have been done.

He said the Management and Staff spent sleepless nights to have the project to this point while thanking staff for the hard work.

He thanked the Government of Sierra Leone for providing the funds noting that the project is solely funded by the Government under the leadership of President Bio.

The Managing Director called on the council, local authorities including the people to protect the facility.

“There are lots of human activities happening from the in-take of the raw water, treatment plant and pipe network and this is not good for the project.

“Don’t buy cement from contractors or attempt to buy anything relating to the project. We have seen projects fail because of such attitudes. Let us protect what we have,” he said.

He called on the contractors to deliver on time while adding that reasonable charges will be put on the water because to get clean water to the door steps involves money.

In his statement, the Chairman Parliamentary Oversight Committee on Water, Hon. Lahai Marah said that one key responsibility of Parliament is oversight.

Hon. Marah said they are satisfied with the Six Towns Water Supply Project but opined that the disturbing thing about project implementation is the delays in releasing funding.

He called on the Ministry of Finance to fast track payment so as to complete the project on time.

Hon. Marah noted that very soon contractors will be called to explain about the progress because the project is at the heart of the people.

“Water is life and we need each and every person to support this project. Let us make sure this project succeeds,” he said.

The Chairman, Board of Directors, Ing. Alhaji Mohamed A. Jalloh was quick to point out the work of the Board taking into cognizance the oversight and supervisory role.

Chairman Jalloh noted that water is life and each and every beneficiary must be vigilant to monitor the implementation.

Speaking during the ceremony, the Deputy Minister of Local Government Melrose Kamity stressed on collaboration with all the sectors. She said from the Paramount Chief down to village headman they are under the Ministry and since they are with the people, they should jealously protect the project. “This is taxpayers’ money, your money and since Government has thought of these districts to provide water, you must handle it with care and protect it,” she advised beneficiaries.

Giving the Keynote address and launching the project, the Minister of Water Resources, Ing Philip Karimu Lansana said there have been several calls for Moyamba District to have safe, clean and affordable pipe borne water.

The Minister said an investigation was launched into water access in Moyamba and the five other Districts and developed a proposal that was presented to the Ministry of Finance.

He assured that the water sector has put in place structures that will see the implementation of projects.

“My Ministry has a team that periodically goes round and monitors happenings on the ground. We also have sectoral meetings where we discuss project activities and this is enough assurance that this project will succeed.

After the Completion of the project, all the houses in Moyamba Township will have access to clean and safe drinking water”, he assured the people of Moyamba.

Ing. Lansana noted that the water will not be free and that with this SALWACO will be able to strive and do maintenance without bordering Government.

He called on the people to protect the project by monitoring it and not to allow the sale of project materials.

“As a Government we are in a hurry to make progress, let us try and do the work on time. The people want to see result and Government also wants to see that result,” the Minister said

He called for collaboration and synergy among stakeholders.

Speaking during the handing over of the site, the Director of Project Management, who also doubles as the Project Manager for the Six Towns Water Supply Project, Ing. Yankuba Jusu Tarawally said the project will be completed in sixteen months and over four hundred thousand people will benefit from the entire project.

He said the project will be implemented in accordance with the Contract agreement and the beneficiary districts include, Moyamba, Kabala, Kailahun, Magburaka, Kambia and Pujehun.

The signing of a contract and launching of the project was climaxed with the handing over of the Moyamba project site to contractors. Handing over sites of Pujehun and Kailahun will be done soonest.