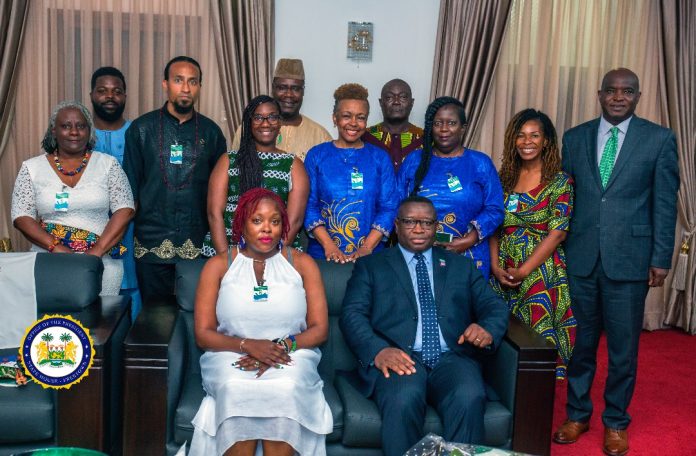 His Excellency President Julius Maada Bio has received Sierra Leonean descendants living in the United States of America during a courtesy call at State House in Freetown.

In his presentation, Deputy Minister of Tourism and Cultural Affairs, William Robinson, said that President Bio was willing to welcome back home Sierra Leoneans living in the diaspora and who had long been searching for their heritage.

He said since their arrival, the delegation had visited some districts in the country, where they were well received and given local Sierra Leonean names.

Head of the delegation, Chavonna Frazer, said they had started planning the visit since they established their Sierra Leonean origin through a DNA test. She said they were thrilled to be back home and to receive such a warm reception from the President. She assured State House that they would be working with the administration, in the years to come, adding that they would bring home other Sierra Leoneans living abroad.

On his part, President Bio said he is happy that the visiting team had rediscovered the connection that they had lost for years. He said they were divided by history but that it was about time they made a conscious effort to reconnect with their origin.

While officially recognizing their new statuses, by handing over their Sierra Leonean passports to members of the visiting team, the President also assured them that Sierra Leone was headed in a new direction and with a determined leadership that was also ready to rebrand a country working hard to catch up with the rest of the world.

“We are touched and moved by your move because we want everyone to come back home. We want you all to come back with your knowledge and expertise and everything to make our country great. Let us use this moment as the beginning to make the future better for us and our kids. The past has happened and it is now history, but let that history serve as something to inspire us to know that we can do better things,” he said.