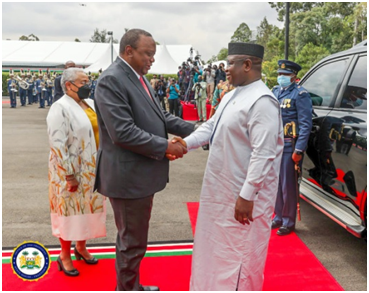 President Dr Julius Maada Bio on the 30th May, 2022 met with his colleague, His Excellency Uhuru Kenyatta, during which period the two Heads of State discussed bilateral relations between the two countries.

President Kenyatta welcomed and thanked President Bio for being a Guest Speaker at the United Nations Peacekeepers Day and for celebrating Kenya’s Independence Day as a special guest.

He added that the two countries had been great friends and had supported each other at continental and international levels.

He further noted that the friendship between the two countries should be moved to the next level, where the full potential of both countries would be harnessed and utilized, saying that the peoples of Sierra Leone and Kenya should continue to work together to move trade and investments.

“Your Excellency, let me use this opportunity to thank you and welcome you and your delegation to Kenya. Do have a pleasant stay,” President Keyatta concluded.

In his response, His Excellency President Dr Julius Maada Bio thanked his counterpart, His Excellency Uhuru Kenyatta, for the warm reception and hospitality accorded him and his delegation, adding that the cordial relations and bonds of friendship between the two countries had existed since the days of former President Jomo Kenyatta and continued till today.

President Bio further commended the Republic of Kenya for their role in the peace process in Sierra Leone, adding that he appreciated President Uhuru Kenyatta for the opportunity to discuss bilateral, regional, and global issues with him.

“I want to use this opportunity to thank you for the donation of 20,000 tablets and power banks in support of the Government’s effort to conduct the Mid-Term Population and Housing Census in Sierra Leone. Thank you for the invitation. I wish you and your people the very best as you continue to contribute to regional and global peace and good governance,” President Bio concluded.