President Julius Maada Bio has officially launched the Free Quality Education (FQE) textbooks’ project worth over Le221 billion. The historic event took place on Wednesday 9th January, 2018, at the Government Secondary Technical School, Main Motor Road, Congo Cross in Freetown.
Speaking to a mammoth gathering of pupils, government Ministers, officials from the Ministry of Basic and Secondary School Education and officials from other MDAs, diplomats, partners, members of the Fourth Estate and other distinguished guests, President Bio reminded his audience that when he initially campaigned on the platform of initiating totally free but quality education for primary and secondary school pupils, he was dismissed by his detractors as a man who makes promises he cannot keep, or was a man who makes unachievable promises.
He maintained, however, that through combined efforts of genuine partners and other stakeholders, he has finally delivered on his promise made way back in August 2018. He called on school managements, pupils, parents and the general public to ensure that they monitor the distribution of the textbooks countrywide and to also ensure they protect the textbooks by discouraging theft and mishandling.
President Bio used the opportunity to warn anyone that would attempt to steal the textbooks, saying anyone caught would not only be prosecuted but publicly disgraced.
The core textbook subjects to be distributed are Maths, English Language, Social Studies, Integrated Science and Civic Education to junior secondary school (JSS) pupils. Those in senior secondary school (SSS) will receive Maths and English textbooks.
The President added that apart from the textbooks, the amount of textbooks printed and supplied by the government and its partners is enough to ensure that each pupil gets one exercise book for each subject.
The Country Representative for Department for International Development (DfID) Mary Hunt also explained DfID’s role in the whole process, adding that DfID readily supported the project because it is to boost education in the country.
Other prominent speakers at the occasion were the Minister of Basic and Secondary Education, Alpha Osman Timbo who informed the gathering that the government spent over Le221 billion to produce and the textbooks; the Chief Education Officer, Dr. Alhaji Mohamed Kamara who performed the role of chairman of the event; the Principal of Government Technical Secondary School who delivered a special welcome address; the Mayor of Freetown Aki Sawyerr who informed her audience that the Freetown city Council has 363 government and government-assisted schools under her jurisdiction, among several others.
The keynote address was delivered by President Julius Maada Bio.
The highpoint of the event was a musical show done by Odelia Kamara and official handing over of the textbooks to the GTSS 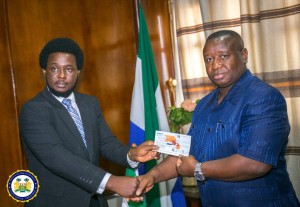