The former Vice President, Victor Bockarie Foh, who was appointed by erstwhile President Ernest Bai Koroma (EBK) yesterday 10th January 2019 said during a radio interview on Radio Democracy 98.1 during the Good Morning Salone programme, stated that the Leader and Chairman of the All People’s Congress, EBK must accept the fact that the current President, Julius Maada Bio is now the President of this country. He furthered that it could be prudent on the part of the former President to go on air and make such a pronouncement. “That could help to mitigate political tension and violence in the country,” Foh suggested.

He went ahead while responding to a question put to him that he had expected EBK to have long ago relinquished his position as Chairman and Leader of the APC contrary to the promise he made in the past to do so. “It is not good that a former President should be thickly involved in politics as such does not augur well for national cohesion,” he maintained.

In a dejected manner he decried and blamed the APC as a party for defaming and setting him up as being part of the Hajj-gate saga saying he is innocent of all the allegations made against him.

He denied paying any money to the Anti-Corruption Commission to the tune of sixty thousand dollars $60,000 as it as alleged as one that the ACC retrieved from him for involvement in fraudulent dealing in the Hajj arrangement. Victor Foh categorically stated that the person who paid that money will be known in due course. The former Vice President said it was a third party that may have paid that money naming Ernest Bai Koroma as one who could probably be in the knowing. He, however, declined to further comment on the issue saying the matter is before the court and does not want to prejudice the case. 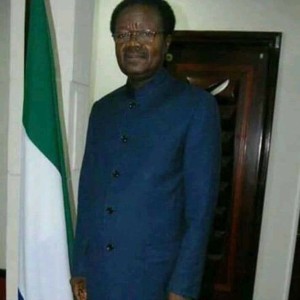