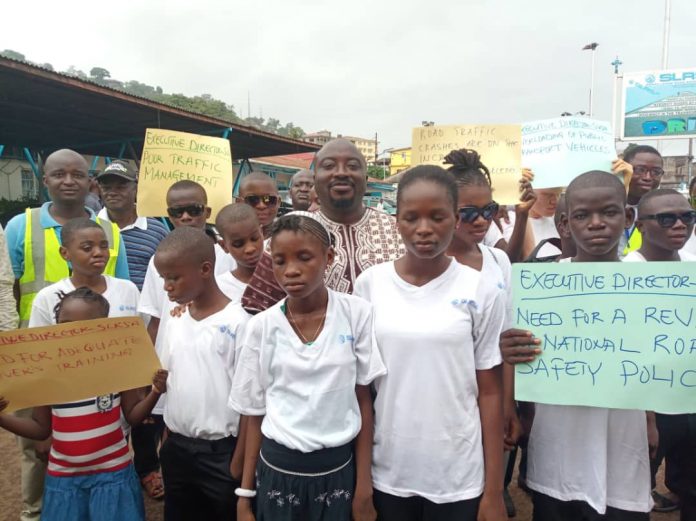 The Executive Director of Sierra Leone Road Safety Authority David Panda-Noah has reaffirmed his institution’s commitment in promoting road safety in Sierra Leone and thus change the road safety situation in the country.

This happened when the SLRSA joined countries across the world to commemorate the 5th Global Road Safety Week on the theme: ‘Leadership for Road Safety’. that saw Persons With Disability (PWD) Issues from Milton Margai School for the Blind, Sierra Leone National Association of the Deaf and Hard of Hearing (SLNAD) among other institutions petition the Sierra Leone Road Safety Authority together with 5 institutions including; Sierra Leone Police (SLP), Parliament of Sierra Leone, Freetown City Council, the Ministry of Transport and Aviation and the Ministry of Works and Public Assets.

The PWD’s called on the SLRSA to place more efforts to Intensify Enforcement on Road safety; Amendment of already existing Road Traffic Acts and Regulations that will guarantee the safety of Persons with Disability issues; SLRSA to institute rigorous Licensing process, Enforcement of the existing ban on metal seats on public service vehicles and for the immediate review of the National Road Safety Policy and Strategy that would seek the interest and safety of Persons with Disability Issues.

Receiving the Petition paper, David Panda-Noah said that the petitions raised are well in place, he however noted that the Authority is presently working tirelessly with the Ministry of Transport and Aviation to see that the House of Parliament amends all existing Road Traffic Acts and Regulations and such amendments would be done after thorough consultations with all stakeholders including PWDs.

He recalled that since he took up office as Executive Director of SLRSA almost one year ago, he has ensured that he puts an end to the registration of vehicles with metal seats; implementation and enforcement of the existing ban on Right-Hand Drive vehicles, instituted a compulsory roadworthiness test on all vehicles before registrations and licensing, and a rigorous driving test for all applicants for driver’s license. According to him, all of these are strategies and policies geared towards achieving the Authority’s mandate as stated by law and making sure that Sierra Leone have an effective and efficient road safety lead agency that works in accordance with international best practice.

David Panda-Noah maintained that under the ‘New Direction’ dispensation, the SLRSA does not work in isolation that is why all key stakeholders in the transport sector are adequately represented in the Authority’s board so that decisions arrived at are unanimous and constitutes the views and aspirations of all road users.

“His Excellency President Julius Maada Bio is very meticulous and concerned about the safety of road user. And Persons with Disability issues are no exception.” Mr. Panda-Noah said.

He reaffirmed the government’s and that of the SLRSA’s commitment in solving the current road safety situation in the country and assured that the concerns raised in the petition would be looked into with the utmost seriousness and urgency.

All the heads of institutions petitioned expressed similar sentiments.